IT’S AMAZING how quickly aviation technology progressed a century ago. The Wrights flew 120 ft. in December 1903, yet by July 1909 Louis Blériot won the London Daily Mail £1000 prize for flying the English Channel, a distance of 23 miles. And in 1911, publisher William Randolph Hearst offered $50,000 to the first aviator flying the U.S. coast to coast, in either direction, in less than 30 days.

Calbraith Perry Rodgers (a grandnephew of naval hero Oliver Hazard Perry) responded to this. He took about 90 minutes training from Orville Wright, was the first private citizen to buy a Wright aeroplane, and promptly won $11,000 in another endurance contest. Then Cal set out to win the Hearst prize.

A real adventurer, Rodgers never worried about that fuel tank over his right shoulder.

The tracks were more than essential navigation (Cal didn’t carry a compass), they were also his conveyors of tech support. Armour set up a three-car Vin Fiz Special to parallel his route. Wright mechanic Charlie Taylor was aboard—and he certainly earned his keep. 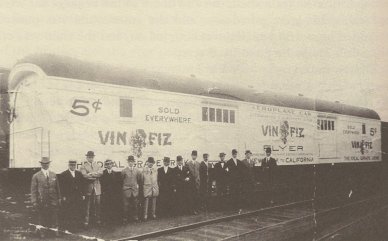 It wasn’t that Rodgers didn’t know how to fly. Rather, his flight was plagued by the fragility of the era’s aircraft and wasn’t helped by Cal’s serious hearing impairment. (He had lost his hearing in one ear and damaged the other through childhood Scarlet Fever.)

His travel from Sheepshead Bay to Pasadena involved a distance of 4231 miles, with just a tick more than 82 hours aloft. This works out to 51.6 mph, not bad considering the Wright EX’s top speed was reported as 55 mph. There were a total of 75 stops, not all of them scheduled, with 16 that could be termed crashes. Akin to the fabled George Washington hatchet, little of the original Vin Fiz made the entire trip.

Rodgers was robust indeed to survive this and 15 other crashes on his flight from coast to coast.

Alas, when Cal landed in Pasadena on November 5, he had missed the 30-day prize limit by 19 days. Plus, he still had to get from Pasadena to the Pacific. On his first attempt, the travel-worn Vin Fiz crashed half way to Cal’s Long Beach goal. This time, he suffered a concussion and spinal injury.

Three weeks later, on December 10, Cal hobbled to his aeroplane on crutches, flew to Long Beach and taxied the Vin Fiz briefly into the Pacific. 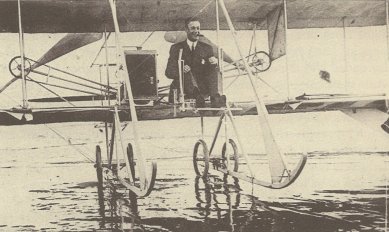 The reflections are from the waters of the Pacific Ocean, Long Beach, California.

Tragically, on April 3, 1912, a final crash into the Pacific took Cal Rodgers’ life, barely 100 ft. away from his triumphal arrival there not four months before. 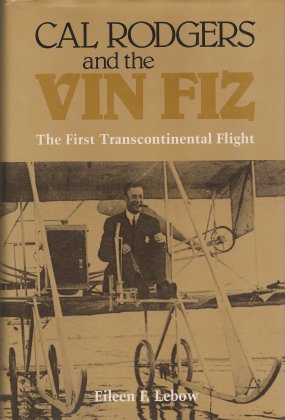 Eileen F. Lebow in her fine book, Cal Rodgers and the Vin Fiz, cites Cal’s wife, “Looking back through the span of years, her judgment of the man was eloquently simple: ‘He was a rare, brave man.’ ” ds