THE 2012 Paris Mondial de l’Automobile has been reported as a combination of scintillating excitement combined with doom and gloom. Having stayed right here in southern California (see Atkinson and Searle below), I offer my own reasons for these contrasting assessments of the show.

Let’s get the doom and gloom out of the way first. Collectively, an environment-saving infusion of battery electric vehicles seems to be glued to the world’s auto showroom floors. Even BEV proponents, Renault’s Carlos Ghosn foremost among them, speak of the necessity of significant government subsidies, both for automakers and purchasers.

Alas, this comes at a time when the new byword is austerity, with seemingly a quarter of Europe forming up against cutbacks in social welfare. I confess to no profound prescience of product planning. But I’d not tie my product’s success to gobs of near-term government spending.

But enough of doom, gloom and government spiffs. Let’s turn to Paris excitement.

Ooo, la la. My favorite car there is the Peugeot Onyx. True, it’s only a concept, never likely to see production. But it is suggestive of Peugeot’s thinking in style and technology. I’d give you the newly introduced McLaren P1 and three future draft choices for one Onyx. 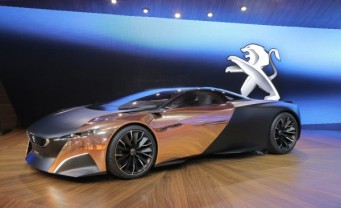 The Peugeot Onyx is a hybrid, propelled by a 3.7-liter diesel V-8 teamed with a lithium-battery-supported electric motor. Claimed maximum torque of the duo is 1061 lb.-ft. Zut alors!

The Onyx’s carbon fiber bodywork is stunning without being outright weird. Pushing the textural envelope, but in a cool way, is its copper sheathing. Peugeot says this copper is left untreated, the better for it to develop additional character with age. The Onyx’s surface duality reminds me of the 1995 Honda Argento Vivo by Pininfarina, which used both aluminum and glass fiber so artfully (see http://wp.me/p2ETap-en). 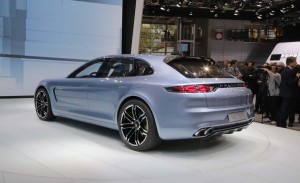 The Porsche Panamera Sport Turismo Concept is another hybrid, this one based on the existing Panamera sedan. No production plans are cited. Image by John Lamm.

What’s more, it’s a hybrid and, based on my experience with the Porsche hybrid sedan’s “soaring” powertrain, one of the world’s best. Alas, the mind boggles when I remember that the Panamera Hybrid I drove about six months ago listed at $110,240.

The Jaguar F-Type gets my nod for the real-car star of the show. It’s officially a 2014 model, to be fitted with various choices of supercharged V-6 or V-8 power. To me, the F-Type’s shape looks sleek from any angle, though it can suffer from a bit too many googahs in special trim.

Jaguar’s F-Type is not simply a latter-day E-Type. Rather, it redefines the idea of a two-seat Jaguar sports car.

The structure is all aluminum, its panels, castings and extrusions held together with welds, bondings and rivets. Some of the panels use “warm-form” technology, heating the aluminum prior to shaping; this, to meet the contour requirements of designer Ian Callum.

Some U.S. sources have the V-6 starting at $69,000; the most potent V-8S just topping $100K. I’ll believe this when I see it; U.K. sources cite only slightly smaller numbers, but in Pounds Sterling.

Not unrelated to my non-attendance of the Paris Mondial de l’Automobile, I highly recommend two delightful books: By Rocking Chair Across Russia and By Rocking-Chair Across America, both by Alex Atkinson and Ronald Searle. 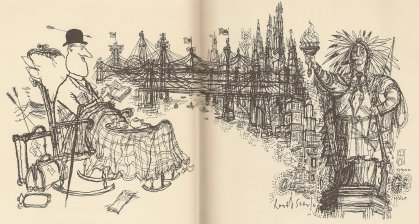 From the Introductory Note of the latter: “Too many books about the United States are written by men who have spent only a few weeks in the country. This one is different: it is by a man who has never been there in his life.” ds