THERE ARE PLENTY of reasons for kids to resume conventional schooling. There are plenty of reasons that this may not yet be the time. Here are tidbits gleaned from Science, the weekly magazine of the American Association for the Advancement of Science.

“Not Open and Shut,” by Jennifer Couzin-Frankel, Gretchen Vogel, and Meagan Weilan, examines school openings around the world in Science, July 17, 2020. Their findings give insights to U.S. proposals being discussed. Here are tidbits from the Science article, together with my usual Internet sleuthing.

The Challenge. This spring, some 1.5 billion of the world’s kids had their schooling interrupted because of the coronavirus pandemic. “However,” as Jennifer Couzin-Frankel and her colleagues write, “as weeks turned into months, pediatricians and educators began to voice concerns that school closures were doing more harm than good, especially as evidence mounted that children rarely develop severe symptoms from Covid-19.”

“Virtual education,” they say, “is often a pale shadow of the real thing, and it left many parents juggling jobs and child care…. It was time, a growing chorus said, to bring children back to school.”

“By early June,” they note, “more than 20 countries had done just that.… It was a vast, uncontrolled experiment.”

In Turin, a teacher reads to students in a makeshift outdoor, socially distanced classroom. This and other images from Science, July 17, 2020.

How Are Kids Infected? Arnaud Fontanet is an epidemiologist at France’s Pasteur Institute. He and fellow researchers studied the virus’ reach in Crépy-en-Valois, north of Paris, by tracing transmissions through schools, one student at a time.

Quoted in Science, Fortanet suggests a pattern “whereas high schoolers were catching the virus at school, the younger pupils caught it from family members and not their classmates.” He admits that “it’s still a bit speculative.”

The Science writers note, “Among the worst schoolwide outbreaks was at Gymnasium Rehavia, a middle and high school in Jerusalem, where 153 students and 25 staff members were infected in late spring…. But the picture is still blurry. Another Israeli outbreak was in an elementary school in Jaffa, with 33 students and five staff members affected.”

Apparently both younger and older kids were susceptible.

Should Kids Play Together? As one authority noted, schools are “where our children run around, play and laugh and argue with each other. They need to return to that sort of healthy normality as soon as possible.”

In London, children at recess play in defined places.

For example, Science notes, “Schools in the Netherlands cut class sizes but didn’t enforce distancing among students under age 12 when they reopened in April…. As spring wore on, many other countries began to rethink distancing in schools…. The changes are driven not just by pediatricians’ advice, but also by practicalities: A full school building leaves little room for distancing.

Kids and Masks. Couzin-Frankel and her colleagues write, “In China, South Korea, Japan, and Vietnam—where masks are already widely accepted and worn by many during flu season—schools require them for almost all students and their teachers…. Elsewhere, masks are less central. In some schools in Germany, students wear them in hallways or bathrooms, but can remove them when seated at their (distantly spaced) desks. 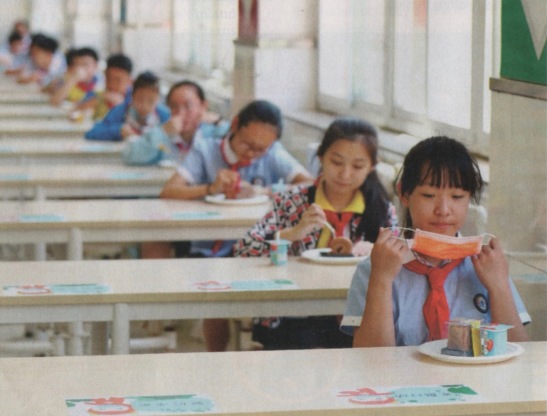 Lunchtime for Beijing kids was a solitary affair in early June, shortly after schools reopened.

There have been troubling incidents, however: In mid-May, Israel was hit with a heat wave of temperatures soaring to 40 degrees Celsius (104 degrees Fahrenheit). With Health Ministry okay, students and teachers put masks aside for almost a week.

Rational, Non-political Conclusions. Emerging patterns suggest a strategy not unlike recommendations for society as a whole: Kids wearing masks can safely be schooled in small groups with controlled distancing.

The Science writers add, “But opening safety, experts agree, isn’t just about the adjustments that a school makes. It’s also about how much virus is circulating in the community, which affects the likelihood that students and staff will bring Covid-19 into their classrooms.”

That is, a one-dimensional dictum of forced opening is not advised.

On Home Schooling. Though not addressed in the Science article, one response to home schooling appears to be a new appreciation of the teaching profession: “It may take a village to raise a child, but it takes an entire vineyard to home-school one.” ds