WITHIN THE QUOTA—A 1923 BALLET FOR OUR TIMES PART 2

YESTERDAY HERE IN Part 1, we talked about Cole Porter’s ballet Within the Quota, its 1923 Paris debut, 1924 U.S. tour, and then prompt disappearance. Today in Part 2, the ballet breaks cover little by little, with its ultimate 2017 Princeton revival involving Penguin Café.

Many of these tidbits are gleaned from Robert Kimball’s most informative notes to the EMI Classics CD containing Within the Quota.

The Plot. Kimball writes, “Within the Quota was a satire on American life and the mythology of instant success.” Cole Porter wrote the music; his Yale pal and fellow ex-pat Gerald Murphy devised the settings.

The Immigrant. This and the following image from “Mini Books of Art.

Upon arrival, the Immigrant’s knowledge of America is based solely on movies. So he’s not surprised by encountering familiar types, a cowboy, a strutting vaudevillian, an heiress, and a jazz-baby. His adventures, though, are interrupted by repeated appearances of the American puritan, depicted in turn as a social reformer, a revenue agent (remember, Prohibition was on), an uplifter, and a sheriff.

“Finally,” Kimball writes, “he meets the Sweetheart of the World, a Mary Pickford character who embraces him and, to the accompaniment of clicking cameras, oversees his metamorphosis from raw immigrant to movie star. This not surprising denouement brings the ballet to a close.” 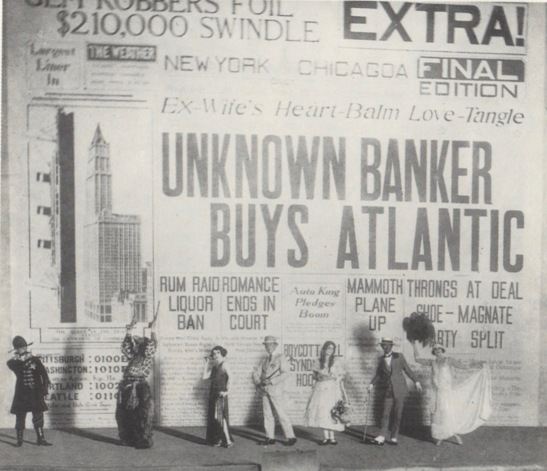 Model of the Murphy set for Within the Quota.

The Missing Orchestration. In a 1950s interview, Porter said to biographer Richard Hubler, “I have even composed a classical ballet, Within the Quota, which was performed in 1923 by the Swedish Ballet Company in Europe and the United States, to great acclaim. Unhappily, the company is now defunct. The original music sheets are lost and I have no copies. My one effort to be respectable must remain in limbo.”

In July 1966, Kimball was organizing music manuscripts that Porter bequeathed to Yale. One of his finds was a scrapbook assembled by Cole’s wife Linda. This scrapbook contained a three- and four-piano score of Within the Quota. Also, Kimball learned that the original Koechlin orchestration had survived in the International Museum of Dance in Stockholm. However, the museum’s founder and curator “politely declined to allow it to be examined and performed.”

Composers to the Rescue. Then, Kimball described, the Cole Porter Trusts “encouraged composer William Bolcom to prepare a new performing edition of the piece. After consulting with his teacher and close friend Darius Milhaud, the Koechlin family, conductor Vladimir Golschmann—who led the premiere of Within the Quota—and others, Bolcom made a new orchestration and bandstration of the ballet.”

Composer Richard Rodney Bennett later prepared and recorded a two-piano version of the piece. Finally, John McGlinn and EMI Classics made successful approaches to the Dance Museum and its new curator. The result: a world premiere recording of the then 68-year-old Porter-Koechlin collaboration.

Details of this “Ballet-sketch in One Act” are offered by sondheimguide.com.

2017 Revival. In 2017, Princeton University Ballet “explored how the arts can serve as an avenue for political expression.”

Image from simonamorrison.com. One of the dancers wears a blue suit and a long red tie.

The new production of Within the Quota was choreographed by Julia Jansen, Princeton Class of 2019. The London-based Penguin Café performed an arrangement of Porter’s music prepared by Simon Morrison, Princeton Professor of Music. Arthur Jeffes’ Penguin Café evolved from his father Simon’s Penguin Café Orchestra.

Within the Quota made the news on BBC World Service.

It took 94 years, but Cole Porter’s self-described “one effort to be respectable” soars. ds