SORTING ONE THING and another, I came upon the November 1966 issue of The Flyer magazine, Vol. 6, No. 8, 40¢. It offers interesting insights about general aviation of more than 50 years ago. Here, in Parts 1 and 2 today and tomorrow, are tidbits gleaned from this issue of The Flyer, together with my usual Internet sleuthing. The magazine’s words are in quotes. 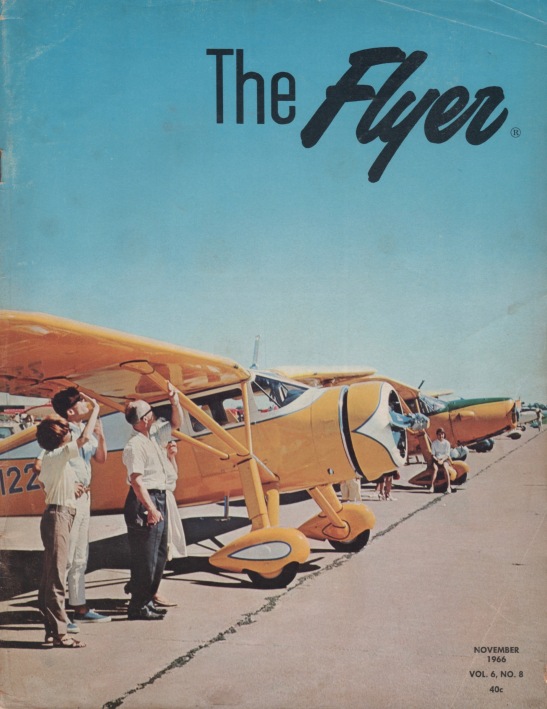 Jungmeister Story. The first two Bucker-Jungmeister BU-133s accompanied the Hindenburg in its ill-fated 1936 flight to Lakehurst, New Jersey. In 1961, a third Jungmeister arrived in crates on a Spanish tramp steamer. It was refurbished by Frank D. Price, who had bought the plane from Count Jose Aresti, president of the Royale Aero Club, Madrid, Spain. 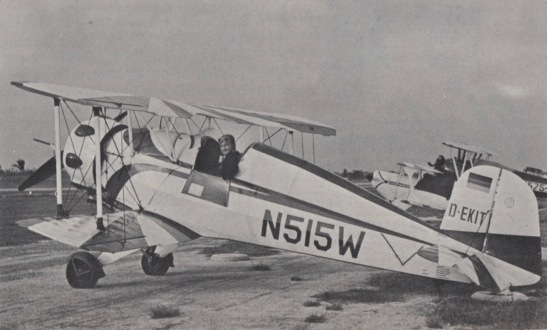 “Aerobatic Club of America President Ray Woody … with his favorite akro-mount the Jungmeister.”

In this issue, The Flyer completed a three-part series on this “great akrobird.” The article included plans used by Harold Krier to build his Championship Krier Kraft, which combined “the best features of German Bucker and the American Great Lakes.”

The Krier Kraft, inspired by the Jungmeister and Great Lakes airplanes.

Three Years Ahead of Time. This 15-foot inflatable balloon “may play an important role in man’s exploration of the moon. The silvery ball was devised to be placed on the moon’s surface, where it would reflect the sun’s rays and serve as a lunar landmark for astronauts.”

The Lunar Landmark evidently wasn’t used in the 1969 effort.

“Two have been built by Goodyear Aerospace under contract to NASA. They would be carried to the moon in unmanned spacecraft, then released and inflated automatically, to serve as lunar landing aids.”

The Flyer Ads. The magazine’s headquarters were in Columbus, Ohio. (See “Cross-Country Travel Takes Off, Sort Of,” for when Columbus was the eastern terminus of Transcontinental Air Transport.)

Most of the magazine’s advertising was general-aviation focused, much of it in the midwest.

However, this tantalizing ad showing a Karmann Ghia made an automotive appearance in The Flyer.

Computerized Air Traffic. One of the issue’s “Flight Editorials” shared the views of A.R. Applegarth, advanced planning v.p. at Narco Avionics: “Within the next ten years, Applegarth predicted, all U.S. airplanes will be navigated by a master ground-based computer, linked by radio to an airborn automatic control system during flight in controlled airspace. He also forecast that the ground computer will be automatically watched by an independent collision avoidance system which will override the computer control if an impending collision is detected. ‘The basic technology to fulfill these predictions is within today’s state of knowledge,’ Applegarth pointed out.”

Tomorrow in Part 2, The Flyer entertains with a “10-Engine Flying Carpet,” instruction on magnetic compasses, a touch of misogynism, a counter to this, and Polynesian fascination. ds