WE AMERICANS AREN’T the only ones soul-searching about what to do with historic icons that no longer reflect modern times. In the London Review of Books, June 12, 2020, Rebecca Gould writes on “Bringing Colston Down.” Here are tidbits gleaned from her article, together with my usual Internet sleuthing.

Rebecca Gould writes, “The statue of Edward Colston that Black Lives Matter protesters pulled down this week was put up in the centre of Bristol in 1895. Bristol-born merchantman Colston made much of his fortune from his 12-year involvement in the Royal African Company (RAC), which transported more than 84,000 slaves between 1680 and 1692.”

Bristol harbor, even after its heyday, with towers of St. Stephen’s, St. Augustine the Less, and Bristol Cathedral in the background. Etching published c. 1850.

Human Lives as a Mercantile Venture. Just as Britain had its government-sanctioned East India Company for mercantile venturing on that subcontinent, its Royal African Company was established in 1660 to trade along Africa’s west coast. Originally exploiting the Gambia River gold fields, the RAC soon found greater profits in human beings.

Crest of the Royal African Company.

The Royal African Company was replaced in 1752 by the African Company of Merchants, existing until 1821 and also involved in the slave trade. Britain prohibited African slave trade in 1807, though slavery existed throughout the British Empire until 1834. (The U.S. Thirteenth Amendment abolishing slavery didn’t come for 31 more years.)

Edward Colston, Philanthropist—and Slave Trader. Gould observes, “Less than a week ago, many of Bristol’s institutions bore Colston’s name. The performing arts centre Colston Hall was established on the site of Colston’s School in 1867. Colston Tower, an office block, was built in 1973, on Colston Avenue, just opposite the statue. ‘It was not until one night in 1998,’ Adam Hochschild writes in Bury the Chains

‘that someone scrawled on its base’ the words ‘slave trader.’ ”

“In May 2018,” Gould continues, “I discovered the bronze statue’s face had been spray-painted white, with a red ball and chain attached to his legs. The timing was no accident: The trustees of Colston Hall had recently voted to ditch the slave trader’s name.… The new name should have been announced this spring, but the pandemic has delayed things. It will happen in the autumn, they now say.” 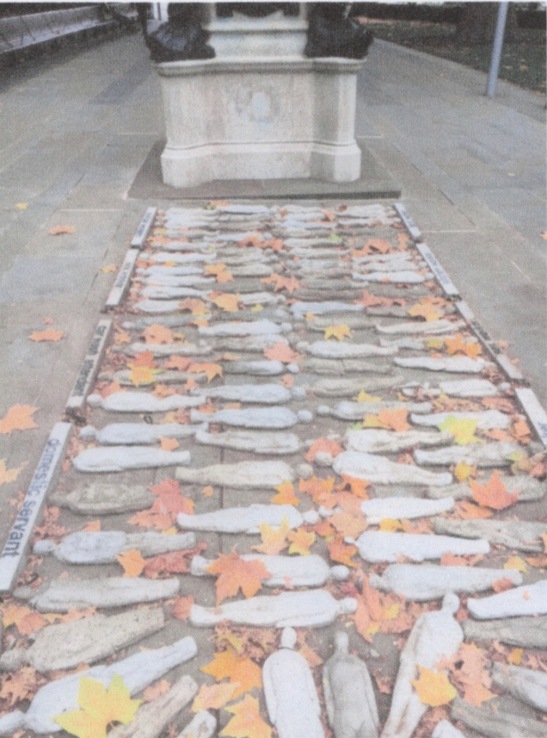 “After the spray paint was removed and the ball and chain cut away,” Gould notes, “I woke one morning in October 2018 to discover rows of miniature stone figures lying on the ground in front of Colston’s statue. The figures were arranged in a simulacrum of human cargo on a slave ship, with labels that drew attention to the persistence of slavery in modern times: kitchen workers, farm workers, sex workers, domestic workers, car-wash attendants, nail-bar workers. The labels around the bow of the ship said ‘here and now.’ ” This installation of stone figures was gradually removed.

“And so the statue of Colston stood,” Gould writes, “unchanged since 1895, until last Sunday, when it came tumbling down with astonishing ease.” Even Bristol’s Society of Merchant Venturers, which had erected the statue, said, “We must continue to educate ourselves about systemic racism.”

Poetry Speaks to This and Other Outdated Icons. Following the statue’s toppling, Vanessa Kisuule, Bristol city poet, responded with a poem: “But as you landed, a piece of you fell off, broke away,/And inside, nothing but air./This whole time, you were hollow.” ds

3 comments on “ON TUMBLING ICONS”