HERE’S ANOTHER of my tidbits on punctuation, today concerning quote marks. This is part of a continuing series here at SimanaitisSays, most recently with “☞Hurrah for the Manicule.☜” Encouragement for both of these came from Keith Houston’s fine Shady Characters: The Secret Life of Punctuation, Symbols, and Other Typographical Marks.

Shady Characters: The Secret Life of Punctuation, Symbols, and Other Typographical Marks,

Curiously, Houston describes that the ☞manicule☜ and “quote marks” are historically related.

Look Here, Please! Houston writes, “Introduced at, yes, the Library of Alexandra, the diple, or “double” (>) was placed alongside a line to indicate some noteworthy text….” Both the manicule and quote marks evolved from this symbol.

For a long time, > had nothing to do with quoting someone. Instead, the word inquit, Latin “says,” was inserted to attribute the material to someone.

Note the diple identifying a line of interest in this papyrus scroll from the middle of the first century. This and the following image from Shady Characters.

The Coming of Christian Manuscripts. Houston offers a fascinating tidbit: “Roughly one in fifty of all known second-century Western manuscripts are of Christian origin, but by the eighth century the ratio had risen to a staggering four out of every five.”

The diple was one way to identify citations of Holy Scripture. However, so was inquit in something akin to HESAYSIAMTHEFATHERANDTHEFATHERISME. (By the tenth century, spaces between words replaced scripto continua.)

The Printed Word. In the 1450s, Johannes Gutenberg used movable metal type to print the Latin Vulgate Bible. Unlike copied manuscripts, this new technology was not amenable to marginal diples or inks of different colors to identify noteworthy text. In fact, Houston notes, “Gutenberg’s Bible itself did not graphically distinguish quotations at all.” 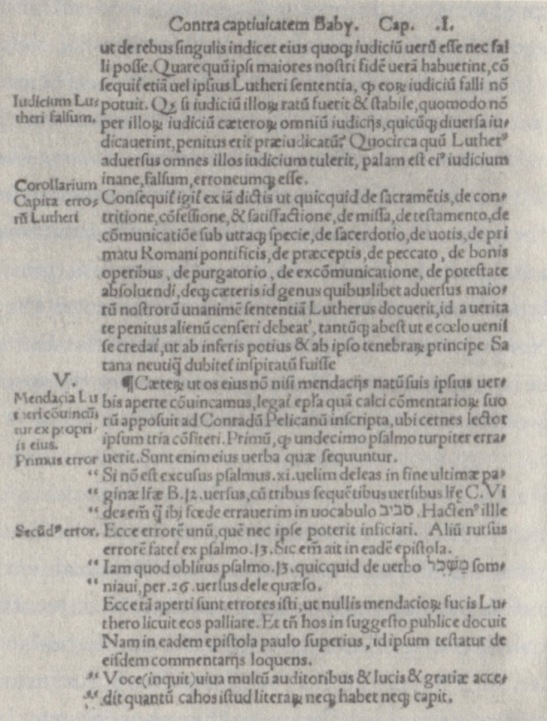 This page of John Fisher’s Defensio Regis Assertionis, 1525, shows an early use of inverted commas as quotation marks.

At the start of the 16th century, though, printers used what were essentially double commas. Eventually, the commas’ placement moved upward on the line to our familiar “He goes, ‘Like….’ ”

It was a long road, however.

By the way, here at SimanaitisSays I have adopted the practice of an added space in something like “The author commented, ‘No way!’ ” (To my eye, it looks less cramped than ‘No Way!’”)

In earlier days, single or double quotes had other purposes. Houston cites The History of Eliza Warwick, an anonymous novel published in 1778:

‘Yes,’ answered I, ‘but I will soon follow you—your Huntley shall protect you in the unknown world you are launching into—he shall be your safeguard, your attendant, ever.’ “No,” cried she, with a firm voice, “no, I charge thee […]”

Recalling my Great Uncle. This reminds me of my Great Uncle Jake, who owed his pair of wooden legs to World War I. Rest his soul, Uncle Jake spoke very little of the war, but he loved to share stories of other sorts.

Often, though, partway through the narrative I’d lose track of who said what to whom. A sample tale here is clarified by 1778 usage:

‘So I was sitting there and who shows up but Eddie.’
“Hi, Jake.”
‘Hi, Eddie.’
“What do you think of that Eagles’ game?”
‘Great. What’s your favorite part?’
“That fumble in the third quarter.”
‘You mean the one at the five-yard line?’
‘“No, that other one Ovchefski picked up at the fifty.”
‘That wasn’t Ovchefski; it was McCann….’

Indeed, and now I know who had it right, my Uncle Jake or Eddie. ds

This entry was posted on May 6, 2020 by simanaitissays in I Usta be an Editor Y'Know and tagged "Shady Characters The Secret Life of Punctuation Symbols & Other Typographical Marks" Keith Houston, Christian manuscripts: 1/50 2nd century versus 4/5 8th century, Great Uncle Jake story telling, manicule and quote marks: same ancestor, single versus double quotes.