MORE THAN A century ago, people came to appreicate motorized delivery of goods. Here are tidbits on Ford’s Model T and the role it played in commercial service.

Ford’s Mission. Henry Ford said of his Model T, “I will build a car for the great multitude. It will be large enough for the family, but small enough for the individual to run and care for. It will be constructed of the best materials, by the best men to be hired, after the simplest designs that modern engineering can devise.”

“But, it will be so low in price,” he continued, “that any man making a good salary will be able to own and enjoy with his family the blessing of hours of pleasure in God’s great open spaces.”

And so it was, especially about the best materials and simplest designs in 1908, the year the Ford Model T was introduced. As noted here at SimanaitisSays, Model T production in 1914 surpassed the combined output of the rest of the world’s auto industry. And, to help his everyman’s claim, Ford doubled his workers’ wages that year to $5/day, with a shortened work day from nine to eight hours.

The Delivery Car. Not long after the Model T’s introduction, enterprising buyers stripped the car aft of its front seats, attached a box back there, and used it as a means to deliver stuff. 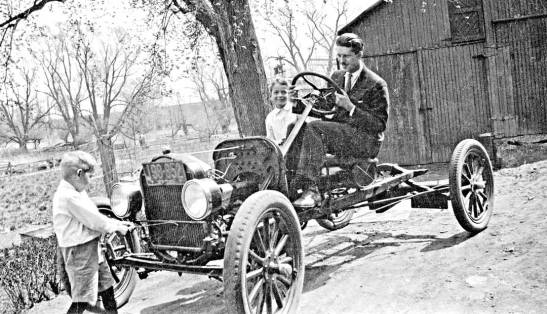 A Model T was amenable to this sort of augmented engineering. Image from The Old Motor.

Ford had market sense, and he even used “Delivery Car” to describe variants of the Model T. Other names for these products intended for commercial use included the C-Cab and Delivery Truck.

A Gooding Offering. Offered at the Gooding & Company’s 2012 Scottsdale Auction, this 1916 Ford Model T Delivery Truck left the company as a chassis, with bodywork to be provided by Abresch Auto Body Ltd., of Milwaukee, Wisconsin. 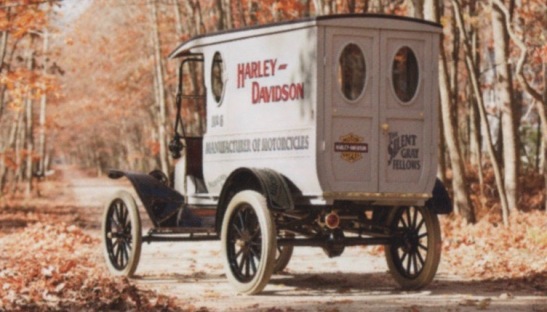 The year 1916 is noteworthy in Model T lore for its last appearance of the brass radiator finish. Serial Numbers of this vehicle and engine, No. 1510801, tell part of the Model T success story: More than 1 1/2 million had already been produced by then 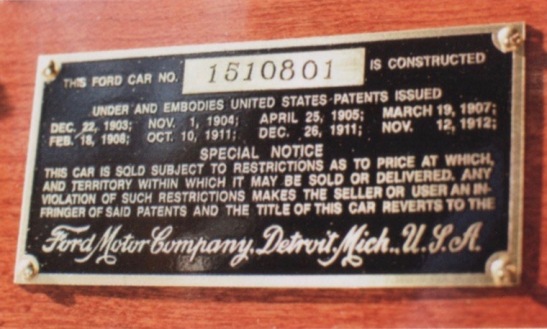 As noted in Wikipedia, “On May 26, 1927, Henry Ford and his son Edsel drove the 15-millionth Model T out of the factory. This marked the famous automobile’s official last day of production at the main factory.”

Like other Model Ts, the Delivery Truck was powered by a 177-cu.-in. (2.9-liter) inline-four engine producing 20 hp at 1600 rpm. Its two-speed planetary gearbox was operated by the car’s leftmost of three pedals; the middle pedal actuated reverse; the one on the right, the brake. See Hannah Elliot’s fine description for details of Model T operation.

The Ford Model TT. Built between 1917 and 1927, the Model TT truck was based on the Model T, but with extended wheelbase on a heavier frame and fitted with a heavier rear axle. 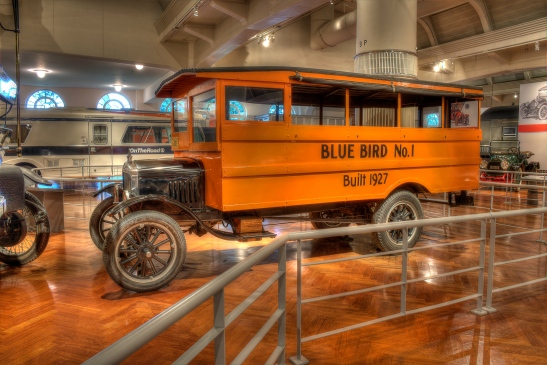 Model T Colors. According to the famed (though likely apocryphal) Fordism, “You can have any color as long as it’s black.” In Automotive News,” June 16, 2003, Diana T. Kurylko wrote, “Indeed, Model Ts came in black for 12 out of 19 model years. But in those seven other model years other colors—such as green, bright red, dark blue, brown, maroon, and gray—were available.”

The preference for black? It dried quicker than other hues, and was thus compatible with Ford’s 1914 adoption of the assembly line.

The Many Hues of UPS. As described in “Three Superlative Delivery Vehicles,” United Parcel Service originated in 1907 when a 19-year-old Seattle kid started running errands on foot or bicycle. His delivery business prospered to include a Model T, and then several of them. Each Model T was painted a different color so folks would know there was more than one. ds