YESTERDAY, HERE AT SimanaitisSays, 18th-century conman Giuseppe Balsamo and his wife Serafina were in Cadiz, Spain. He had just “acquired” an expensive walking stick set with diamonds in its handle and containing a repeating watch (the kind that chimes on demand).

Today in Part 2, the Count Alessandro di Cagliostro appears in London, 1776, with Spanish and Portuguese coins in his pocket and an expensive walking stick set with diamonds in its handle and containing a repeating watch. The Countess Seraphinia Felichani accompanies him.

The Count Alessandro di Cagliostro, 1743–1795, aka Joseph Balsamo, aka Giuseppe Balsamo, Sicilian adventurer extraordinaire. This and the following images from cannibisculture.com.

What of Guiseppe Balsamo? He disappears from the records. As in Part 1, my primary sources come from faust.com.

Ancient Egyptian Freemasonary. A man named Joseph Cagliostro was initiated into the Masons’ Espérance Lodge No, 289 in London’s Soho, 1776. Faust writes, “The Esperance Lodge was rife with esoteric rites rooted in Templar legends and Rosicrucian enlightenment, and it is little wonder Cagliostro found an affinity here.” 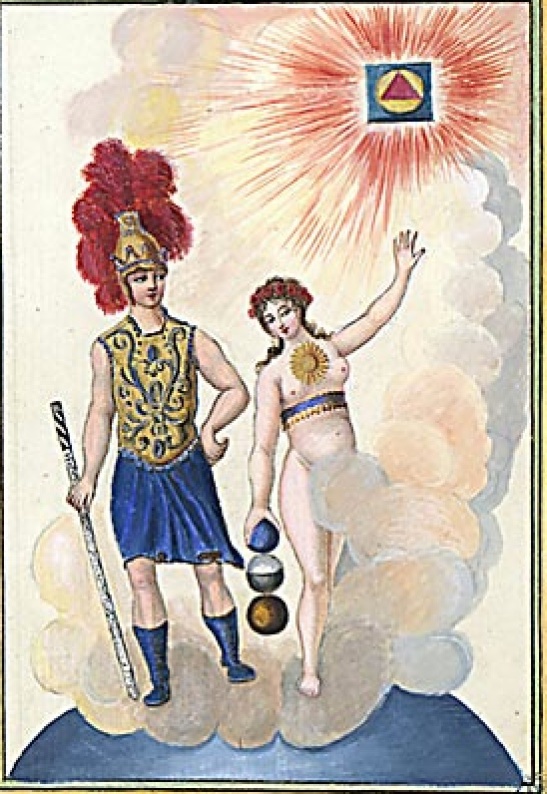 Illustration from The Most Holy Trinisophia, said to have been in the possession of Cagliostro.

The Count invented new rites based on ancient Egyptian traditions. And, in time, he let it be known that he was, indeed, the Great Copt.

Cagliostro combined this status with his apothecary skills: He marketed Egyptian Wine and a complexion pomade called Restorative Powders of Count Cagliostro formulated for women who had lost their youth.

A Movable Con. Like clients’ youth, scams aren’t forever. In December 1777, the Count and Countess were on the lam in Brussels, and, later, in Venice, St. Petersburg, Warsaw, Frankfurt, and Strasbourg. From 1777 through 1780, the couple intermittently reverted to their earlier di Pellegrini moniker.

Count Cagliostro, as depicted at The Gallery of Historical Figures.

Another Treasure Hunt. The pair arrived in Latvia in 1779. Faust writes, “He set up a Lodge of Adoption to allow women to participate in Masonic society, experimented in alchemy with his hosts, the von Medem family, and led them on a treasure hunt through their ancestral lands at Wilzen.”

“Although they found the place where the treasure was buried,” Faust continues, “his occult powers were inadequate to enable him to overcome the terrible demons who were guarding it (as he explained it).”

It helps to be a multifaceted scammer.

Cagliostro performing a séance: “Banquet in the Afterlife in Rue Saint-Claude,” illustration from The Mysteries of Science, Louis Figuier, 1893.

The Humanitarian Touch. The Cagliostros exhibited humanitarianism, though not completely altruistic. As Faust writes, “His wealth … went as it came, in part because of his generosity to the poor, and in part because of his grandiose spending. Although his disciplines were eager to contribute, he refused them proudly. His wife, however, contrived to accept on his behalf.”

In a sense, Cagliostro had a heart of gold, but with a mind obsessed with it as well. Tomorrow in Part 3, we’ll see how all this ends. (What with disenchanted acolytes flipping and the Castel Sant’Angelo as a compulsory residence, not particularly well.) ds