SHERLOCK HOLMES AND THE UNDEAD

WHAT WITH Halloween approaching, and with the world’s greatest consulting detective being immortal, it’s not inappropriate to address Holmes and the Undead.

Here are tidbits from the Sacred Canon, subsequent Sherlockian research, SimanaitisSays, and my usual Internet sleuthing.

“The Adventure of the Sussex Vampire.” How enticing! A vampire tale with the word “sex” subliminally in the title. I’ve already mentioned this chronicling of Dr. John H. Watson in “Holmes and Vampires” here at SimanaitisSays.

Was the mysterious Peruvian woman a vampire?? Illustration by Howard K. Elcock for the Strand Magazine, January 1924.

Briefly, from the beginning of the Sussex matter, Holmes is an Unbeliever: “Rubbish, Watson, rubbish!” he says, “What have we to do with walking corpses who can only be held in their grave by stakes driven through their hearts? It’s pure lunacy.”

“The world is big enough for us.” Holmes advises, “No ghosts need apply.”

In A Sherlock Holmes Companion,

1980, editor Peter Haining shares details of this séance as reported in The Baltimore Sun. “Ray Hambly, director of the Hilltop Theatre who has studied spiritualism and made it a hobby, acted as the ‘microphone, the broadcasting system,’ as his hand wrote out the messages.”

“Mr. Hamby is not a member of the group,” the report continues. “He knows virtually nothing of Holmesiana. It would take a scholar to answer some of the questions we asked—all of which were answered perfectly.”

“Are you happy in the afterworld, Sir Arthur?” he was asked. “Not entirely.” “Are there other manuscripts you have written still undiscovered?” “Yes.” “How many times was Dr. Watson married?” “Marriage is a state of mind.”

To one sharing Holmes’ skepticism for ghosts, the questions were hardly probing.

A Holmes-Van Helsing Connection. Much more tantalizing is Sherlockian William Leonard’s “Re: Vampires,” a thesis also offered in Haining’s book. “After reading it,” Haining says, “I have to confess that I’ve never been able to see Sherlock Holmes and Professor Moriarty in quite the same light as before….”

According to Bram Stoker, in 1890 Count Voivode Dracula and two vampire lady friends were shipped to the Yorkshire coast of England in boxes of unconsecrated earth in which they had been buried centuries before in Transylvania.

The intent of their visit was to vampirize all of England, a task certainly worthy of Holmes archenemy Moriarty. In fact, William Leonard shares the view of eminent Sherlockian Professor Jay Finley Christ that Moriarty-Dracula was one and the same. 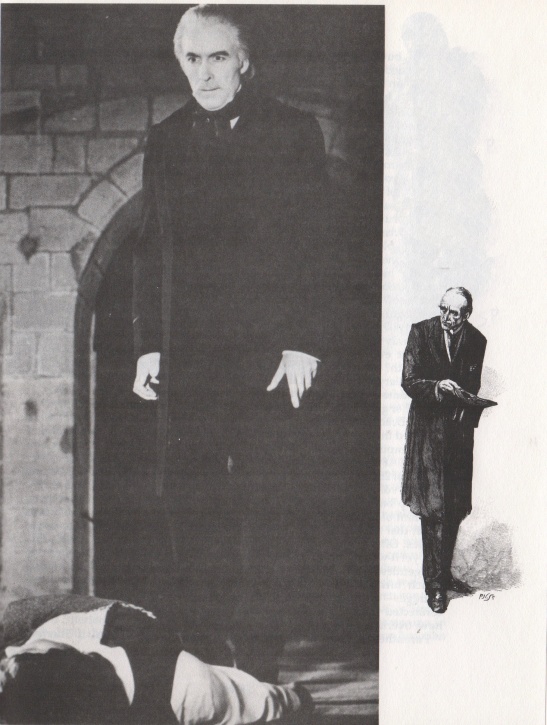 Dracula as portrayed by Christopher Lee in Count Dracula, 1970; Moriarty as illustrated by Sidney Paget. Image from A Sherlock Holmes Companion. 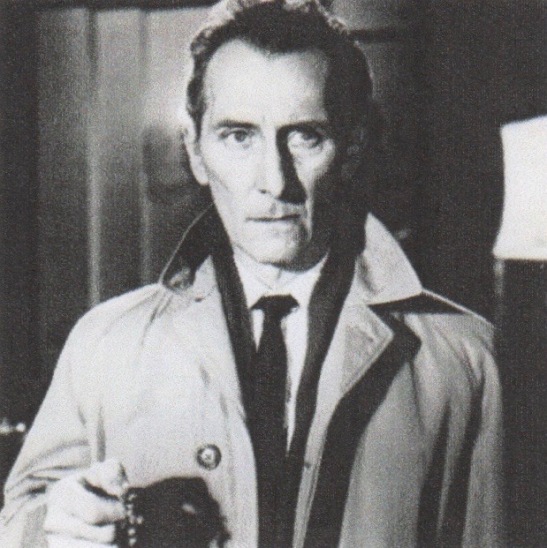 Above, Van Helsing. Image from fandom.com. Below, Holmes. Image by Sidney Paget.

“Van Helsing,” Leonard notes, “is supposed to be a much more elderly man than Holmes, but the assumption of old age was one of Holmes’s best tricks when he assumed a disguise.”

A Holmes-Van Helsing connection is reenforced linguistically: Leonard notes that Van Helsing “maintains an exaggerated pose of broken English except in moments of stress, when he speaks in flowing prose of complete clarity—and at times his conversation sounds like the voice of the Master himself….”

A Chilling Thought. It’s quite possible that the Moriarty-Dracula/Holmes-Van Helsing matter isn’t over: Leonard observes, “Stoker’s account didn’t dispose of the Count… for they used a metal dagger instead of a stake of holly….