SAMUEL JOHNSON’s A DICTIONARY of the English Language, 1755, is anything but dull. Nor is Ambrose Bierce’s A Devil’s Dictionary, 1911, at all dry and musty. The tradition is maintained by today’s Merriam-Webster Dictionary, but for a different reason: gender.

Here are tidbits on these three lexicographic endeavors. 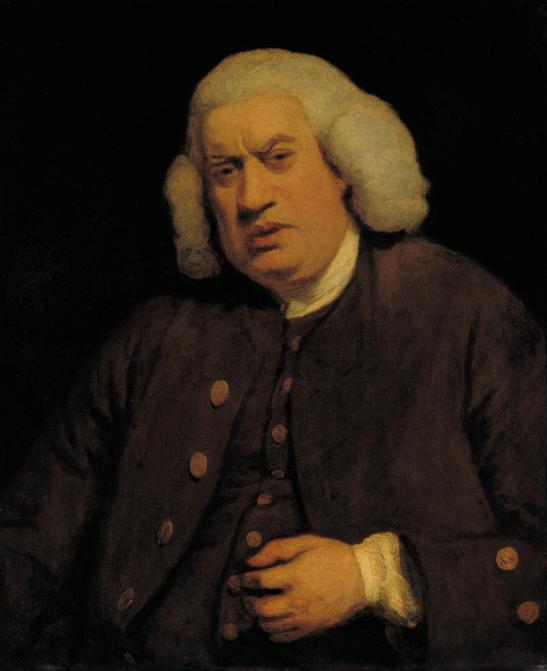 Samuel Johnson’s “Oats.” According to Wikipedia, Johnson’s A Dictionary of the English Language “had a far-reaching effect on Modern English and has been acclaimed as ‘one of the greatest single achievements of scholarship.’ ”

The title page of the original, 1755. See also Samuel Johnson’s Dictionary of the English Language,

Examples of Johnson’s wit are abundant: “Oats: a grain which in England is generally given to horses, but in Scotland supports the people.”

“Monsieur: a term of reproach for a Frenchman.”

It was Johnson who also remarked, “Depend upon it, sir, when a man knows he is to be hanged in the fortnight, it concentrates his mind wonderfully.”

Ambrose Bierce’s “Egoist.” Bierce’s witty comments were plagiarized for years before being gathered into books. He published The Cynic’s Word Book in 1906 and an expanded version as A Devil’s Dictionary in 1911. The American Revolution Bicentennial Administration named A Devil’s Dictionary as one of “The 100 Greatest Masterpieces of American Literature.”

Here are samples of Bierce’s lexicographic skills: “Egoist: A person of low taste, more interested in himself than in me.”

“Marriage: A household consisting of a master, a mistress, and two slaves, making in all, two.”

“Conservative: A statesman who is enamoured of existing evils, as distinguished from the Liberal, who wishes to replace them with others.”

“Positive: Mistaken at the top of one’s voice.”

This last one reminds me of a great Ring Lardener passage in his book The Young Immigrunts, 1920: “Are you lost daddy I arsked tenderly.” “Shut up he explained.”

Merriam-Webster’s “They.” As reported by Jacey Fortin in “When Dictionaries Wade Into the Gender (Non)Binary,” The New York Times, September 20, 2019, the pronoun “they” has received an update entry in Merriam-Webster. The word’s added new sense: “used to refer to a single person whose gender identity is nonbinary.”

Fortin adds, “Nonbinary people do not identify as either male or female.”

By the way, Merriam-Webster says “binary,” as in ”two things or parts,” dates from fifteenth century Middle English. It’s related to the Late Latin binarius, from Latin bini two by two.

Fortin asks whether Webster-Merriam’s 21st century “they” is “a powerful statement about evolving understandings of gender identity” or is it “something much more elementary: a reflection of changing times.”

“The dictionary, after all,” Fortin writes, “is more a rearview mirror than a vanguard of change, said Peter Sokolowski, an editor and lexicographer with Merriam-Webster.”

In the same article, Fortin cites Laura A. Jacobs, a therapist in New York who focuses on L.G.B.T.Q. clients “and whose preferred pronouns include she, he and they—or none at all.”

Mx? Merriam-Webster cites Olivia Goldhill, a Quartz philosophy and psychology journalist: “The word ‘Mx’ was first suggested in the late 1970s as a feminist word for those who didn’t want their gender to be revealed in their title, and there are many men and women who use Mx for similar reasons today.”

And some folks haven’t even got used to Ms. yet. ds

This entry was posted on September 27, 2019 by simanaitissays in I Usta be an Editor Y'Know and tagged "A Dictionary of the English Language" Samuel Johnson, "Merriam-Webster Online" dictionary, "The Devil's Dictionary" Ambrose Bierce, "they" as a non-gender singular pronoun, "When Dictionaries Wade Into the Gender (Non)Binary" Jacey Fortin "The New York Times", Ambrose Bierce on love marriage conservative positive egoist, Ring Lardner "Shut up he explained", Samuel Johnson on oats monsieur hanging.