THE BANKRUPTCY OF famed travel agency Cook’s is sad indeed after its 178 years in providing travel services. I have a bibliographic interest, in that my most recent Cook’s Traveller’s Handbook dates from 1937. My oldest is from 1904; most of my other seventeen Cook’s are from the 1920s.

The company’s demise came abruptly on September 23, 2019. “At the moment of its collapse,” Shannon Sims reports in The New York Times, September 23, 2019, “Thomas Cook had a debt of 1.7 billion pounds, about $2.1 billion, an amount the chief executive, Peter Fankhauser, had called ‘insurmountable.’ ” 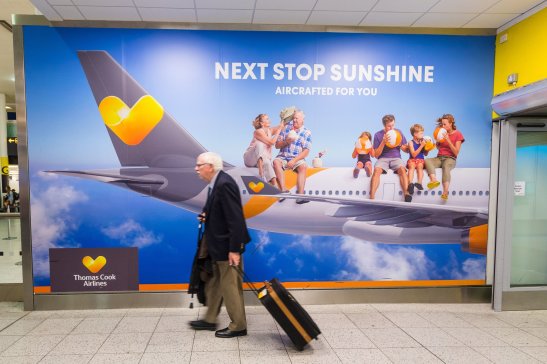 Image by Vickie Flores/EPA, via Shutterstock, from The New York Times, September 23, 2019.

Sims writes, “About 600,000 travelers around the world were affected, 150,000 of them from the United Kingdom…. more than 20,000 employees worldwide found themselves without a job.”

A Tourist Airlift. According to bloomberg.com, the U.K. government “deployed the ‘largest repatriation in peacetime history’ to bring home more than 150,000 tourists stranded on overseas beaches and in vacation hotspots…. The government said it would work to return vacationers over the next two weeks in an exercise dubbed Operation Matterhorn.”

Why Did Cook’s Fail? In two words, the Internet. Sims writes in The New York Times, “The travel bookings business had increasingly moved online, but Cook’s business largely did not, though it announced an alliance with Expedia in 2017.”

Cook’s provided full service through more than 600 “high street” stores globally. Each store offered coordination of everything from tours to hotels to flights, even to meals. The company slogan was “Don’t just book it, Thomas Cook it.”

Sims writes, “As recently as this summer, Thomas Cook Airlines had 34 planes flying passengers to at least 82 destinations around the world, in Africa, Asia, North America, and Europe.” An example: Over the past year, the company operated nearly 1000 flights with 257,000 passengers out of Orlando International.

Operating its own airline drained resources. A declining interest in package tours hurt as well, with people plannning their own adventures. Even Brexit played a role in Cook’s bottoming line.

Sims quotes Zane Kerby of the American Society of Travel Advisors: “A lot of your bills are in dollars; you have to buy oil in dollars. So when there are shocks to the system, like the U.K. with Brexit and the pound losing so much value, all of a sudden that makes the loans you have very difficult to service.” 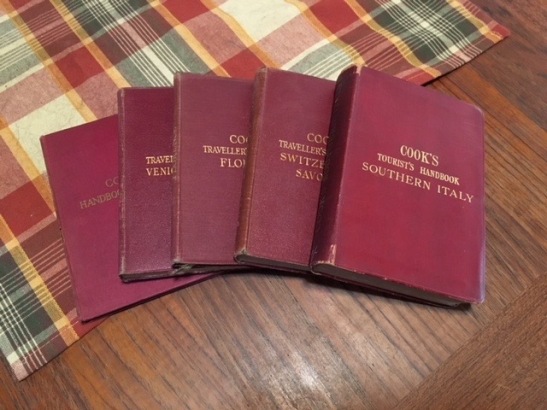 How Cook’s Earned its High Street Cred. Thomas Cook was a Derbyshire cabinet maker who, in 1841, started arranging temperance supporters’ rail travel among the cities of Leicester, Nottingham, Derby, and Birmingham. London’s Great Exposition of 1851 gave Cook’s business a boost, and he opened an office there in 1865.

In 1872, his son joined Cook in establishing Thomas Cook & Son. Business differences precipitated Cook senior’s retirement in 1878; he returned north and lived in Leicester until his death in 1892.

Like Baedeker’s guidebooks, lovely maps are part of the Cook’s Travellers Handbook experience. Unlike ad-free Baedeker’s, the Cook’s advertisements are added entertainment.

Cook’s Travellers Handbooks. Wikipedia cites an 1845 Handbook for the Trip to Liverpool as an early publishing effort. By the publication of my 1904 Cook’s Tourists’ Handbook to Normandy and Brittany, other Cook’s had been offered, including those for Belgium and the Rhine (1874), Florence (1874), Southern Italy (1875), Egypt (1876), Palestine and Syria (1876), and far ranging as New Zealand as a Tourist and Health Resort (1903).

Gee, it makes my Cook’s from the 1920s appear pretty recent. ds