IT DIDN’T TAKE long for Syd Chaplin, Charlie’s half-brother, to add aviation to his entrepreneurial set of ambitions. A hundred years ago, Los Angeles was a center of aviation development, and Syd’s air field was part of this.

Twenty-six Miles Across the Sea. After establishing Syd Chaplin Aircraft Corporation in 1919, Syd began buying up land for an air field at Wilshire and Crescent, adjacent to DeMille Field #2, which had opened in 1918. Syd also obtained rights from the Wrigley family to set down at Avalon, Catalina, near the St. Catherine Hotel. He also leased land from a marine company in Wilmington to use as a terminal for the Catalina service.

On July 12, 1919, Chaplin-Air-Line inaugurated regular flights to Catalina with six round trips each day. Prompt delivery of Los Angeles newspapers was part of the company’s daily business. 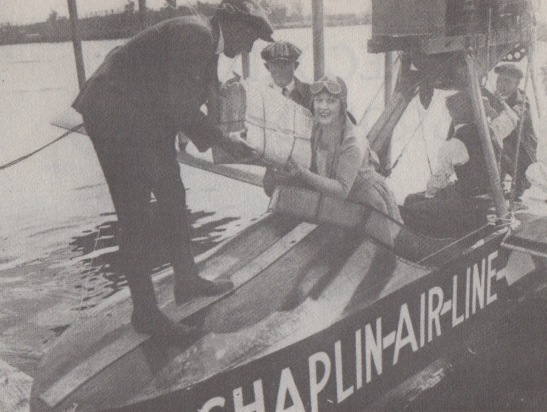 Popular screen star Edna Purviance receives the first shipment of Los Angeles newspapers to be delivered by air to Catalina. This and the following images from Los Angeles Aeronautics 1920-1929.

According to Wikipedia, Chaplin-Air-Line was the first privately owned American airline. The St. Petersburg Tampa Airboat Line, operated briefly in 1914, was city-owned, for example.

One of Chaplin-Air-Line’s several Curtiss Seagulls.

Syd was Southwest distributor for Curtiss aeroplanes. His airline used a Curtiss Seagull, a small flying boat that proved popular with the social set visiting Avalon. Chaplin-Air-Line lasted only a year. Selling out to his partner Emery Rogers, Syd had grown wary of the government requiring pilots’ licenses and taxing air transportation.

All Records Broken. Chaplin-Air-Line went out with a significant publicity coup: Los Angeles to San Francisco and return in one day. As described in Los Angeles Aeronautics 1920-1929, “A Los Angeles bank received a cablegram from the Sumitoma [sic] Bank of Osaka, Japan, on Friday evening, October 17, 1919, asking that certain securities be placed on a ship leaving San Francisco the next day in order that they would reach Osaka by November 1st.”

“The bank contacted Chaplin, and Saturday morning Emery Rogers with A.W. Vance as passenger, flying a Curtiss ‘Oriole,’ left Chaplin Field at 6:46 a.m. and arrived in San Francisco 4 hours, 34 minutes later. The securities were delivered to the ship and after lunch Rogers and Vance returned to Los Angeles in 4 hours, 2 minutes, making the first round trip to San Francisco in one day with a total flying time of 8 hours, 36 minutes.”

The Chaplin Curtiss Oriole was a clearly recognized craft. Powered by an OX-5 engine, the Oriole could reach 95 mph.

Syd Gets Caught Up in Scandal. From 1924 to 1928, Syd resumed his film career in the U.S. with Warner Bros. and then in England with British International. In 1929, he was accused of sexual assault by an actress. British International settled out of court, and Syd was ostracized. He moved to Europe, leaving scads of unpaid taxes and declaring bankruptcy in 1930. Syd died, age 80, on April 16, 1965, the 76th birthday of his half-brother Charlie. Charlie died in 1977 at age 88. ds