A TALE OF TWO BOUQUINISTES

I’VE ENJOYED encounters with bouquinistes, booksellers offering their wares along the Seine in Paris. One result is a kid’s magazine, titled Tintin—Le Journal des Jeunes de 7 à 77 ans. I’m rather closer to the upper age limit than the younger, but the magazine is still great. The other is from friend Edie De Avila, who gifted me with The Bookseller: The First Hugo Marston Novel. Hugo Marston, I soon learned, also enjoys visiting les bouquinistes along the Seine. Indeed, his adventures are a lot more adventurous than mine.

Here are tidbits about these encounters with les bouquinistes.

Tintin. Tintin is a character created by Belgian cartoonist Georges Remi, who worked under the pen name Hergé.

Georges Prosper Remi, pen name Hergé, 1907–1983, Belgian cartoonist. His Adventures of Tintin are considered among the most popular European comics of the 20th century.

Hergé established Tintin magazine in 1946. Wikipedia says, “Hergé’s works have been widely acclaimed for their clarity of draughtsmanship and meticulous, well-researched plots.”

From left to right, Professor Calculus, Captain Haddock, Tintin, Thompson and Thompson, split by Snowy, and Bianca Castafiore. Image from the Hergé Foundation.

I paid a bouqiniste 4€ (about $5.30) for my wrapped, mint-condition Tintin magazine, acquired during one of my early retirement stays in Paris in the 1990s. Dramatic racing cars on the cover and a “Spécial Auto 48 Pages” blurb clinched the deal.

Appropriately enough, the magazine leads off with “Les Héros des 500 Milles,” a four-page thriller replete with plenty of Vroo Vroop Vroaa Vrooarr! The tale celebrates the mechanics’ role, particularly in the early days when a riding mechanic was de rigueur.

The fourth Indianapolis 500, May 30, 1914, was won by René Thomas and his riding mechanic Robert Laly in their French Delage. Hergé’s fictionalized account of this race employs an oft-used theme: The riding mechanic saves the day through heroism of holding a hot exhaust pipe in place until the checkered flag.

Eleven other cartoon features in the magazine don’t lack for variety: In one, “Arnoul, Le Croisé” is a Crusader battling le Sultan Kilidi Arslan. In another, “Le Mur du Silence,” “The Wall of Silence,” has a ballistic missile saving the day. “Les Aventures de Chick Bill Le Cow-Boy” almost, but not quite, needs no translation. 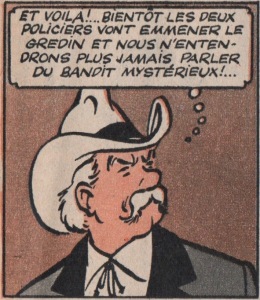 The magazine blurb’s 48 pages of auto features don’t disappoint: There’s everything from a report of the Austin-Healey 100 Six (“une joie delectable”) and details of the Formula 2 Cooper (“De jolis joujoux, n’est pas?”), to “l’inimitable champion du monde” Juan-Manuel Fangio and his Maserati winning the 1957 French Grand Prix at Rouen.

Another Bouquiniste. The Bookseller, by Mark Pryor, introduces readers to Hugo Marston, bibliophile and head of security at the U.S. Embassy in Paris. 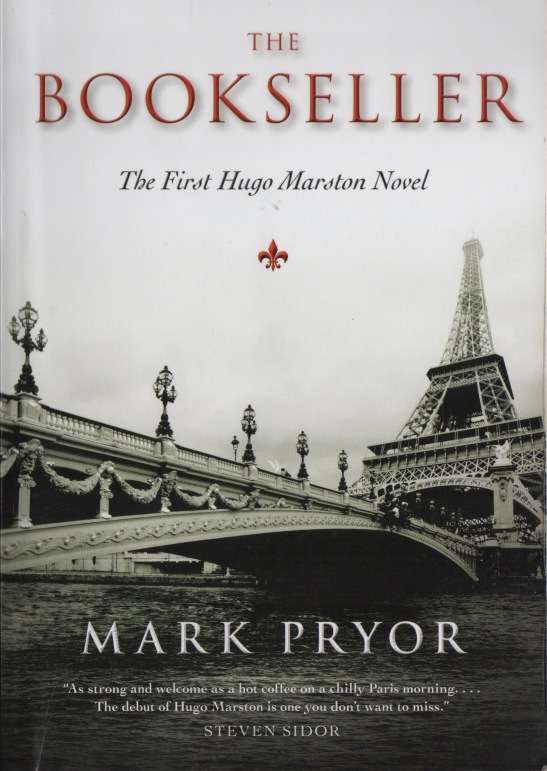 Max Koche is an elderly bouquiniste whom Marston witnesses being abducted at gunpoint. Marston learns that his bookseller pal is a Holocaust surviver and Nazi hunter. Before long, other bouquinistes are found floating in the Seine, and drug cartels are suspected.

Claudia Roux is a journalist, police reporter for Le Monde, and romantically involved with Marston. Her father is a French aristocrat who may or may not be trusted. Unraveling a complex tale involving World War II codes hidden in certain books, Marston teams up with Tom Green, a retired freelance CIA agent.

What with it’s being the first of eight Hugo Marston adventures, I sense a lot of entertaining reading to come. ds