KLEPTOCRACY IS DEFINED by the OED as “a ruling body of thieves.” Merriam-Webster amplifies a bit: “government by those who seek chiefly status and personal gain at the expense of the governed.” Vadim Nikitin offers examples in “Kleptocracy,” in the London Review of Books, February 21, 2019. Here are tidbits of several kleptocratic cons cited in his article.

Moneyland. One of the books that Nikitin reviews is Oliver Bullough’s Moneyland: Why Thieves and Crooks Now Rule the World and How to Take It Back. Moneyland, Bullough explains, is “a virtual country where, if you are rich enough, whoever you were, or wherever your money came from, the laws did not apply to you.”

“Money is international,” Bullough observes, “while laws are not.” 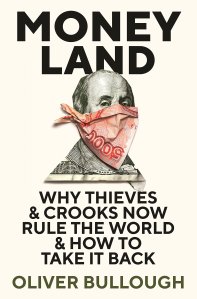 Moneyland: Why Thieves And Crooks Now Rule The World And How To Take It Back,

Moneyland’s Reach. Nikitin observes, “Developing and post-Soviet countries are where most of the money is stolen, but it is here in the UK and in other apparently clean and well-governed places where it is laundered and spent—on things like luxury properties and private school fees.” He cites Bullough in this regard: “Wherever money is stolen from, it ends up in the same places: London, New York, Miami….”

Professional Advice. The kleptocrats, Nikitin quotes Bullough, “do this with the ‘enthusiastic collaboration of Western professionals.’ A rogues’ gallery of smarmy lobbyists, tax lawyers, PR officers, and estate agents hammers home this point.”

My favorite rascal cited is an American lawyer known for rewriting corporate-secrecy laws to favor his rich clients: He compares himself with God, but notes, “I didn’t take the seventh day off.”

Banal, But Effective. The Russian Aeroflot/Andava affair wasn’t particularly sophisticated, but it scammed millions of dollars. At one time the world’s largest airline, by the 1990s Aeroflot “was in a tailspin of debt, wage arrears and cash-flow problems,” Nikitin writes. 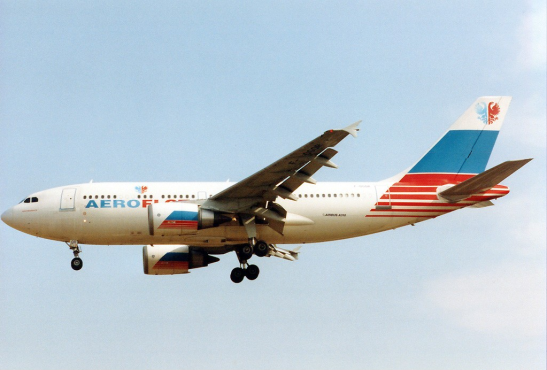 Image by Torsten Maiwald from Wikipedia.

Reacting to the tailspin, Aeroflot’s CEO ordered the airline’s international branches to channel their ticket sales, hundred of millions of dollars each year, to a Swiss company named Andava. All but unknown, Andava earned nearly $11 million in overcharged commissions for this essentially redundant business service.

What’s more, Andava then lent money back to Aeroflot, with interest charged, of course.

All this went undisclosed until a Russian police investigation revealed that Andava was co-owned by Aeroflot’s CEO.

A Particularly Evil Scam. “One of the most lucrative criminal industries today,” Nikitin writes, “is the illegal trade in rhino horn, which mostly takes place between South Africa, on one side, and China and Vietnam, on the other.” It’s certainly lucrative: Rhino horn can cost “up to $60,000 per kilo, at least 25 percent more than gold.”

Image from Defenders of Wildlife.

Sadly enough, “The trade is not only driven by cultural factors. In Vietnam, health officials are believed to be bribed by transnational criminals to prescribe rhino horn as a cancer treatment.”

Kleptocrats, Belgian Dentists, and the Vulnerable. Moneyland participants are a varied lot. Kleptocrats and dictators deal with “evil” money. By contrast, in banker parlance, “naughty” money is sought by “ ‘Belgian dentists,’ solidly bourgeois European tax-dodgers who hid a portion of their wealth in Swiss banks but wanted greater access and higher returns.” Also, “scared” money involves Jewish refugees and other vulnerable groups.

Nikitin recalls working with a business intelligence consultancy and being asked whether they had any “good Portuguese-speaking analysts.” The reason: “The collapse in crude prices was driving Angola’s oil-rich elite to stash their wealth abroad in anticipation of tighter current controls. ‘We’ve got a whole load of fresh Angolans coming your way.’ ” ds

This entry was posted on April 14, 2019 by simanaitissays in And Furthermore... and tagged "Belgian dentists": naughty money, "Kleptocracy" Vadim Nikitin "London Review of Books", "Moneyland: Why Thieves and Crooks Now Rule the World and How to Take It Back" Oliver Bullough, Aeroflot/Andava affair, American lawyer "compares himself with God", rhino horn as cancer cure.