A TASTE OF LONDON’S ORANGES AND LEMONS PART 2

WE’VE ALMOST COMPLETED the first half of our visits to London’s historic churches prompted by the nursery rhyme “The Bells of London Town,” aided by Baedeker’s London and its Environs, 1905, and my considerably more recent Internet sleuthing.

Baedeker’s London and Its Environs,

Let’s continue with The Bells of London Town.

Kettles and pans,
Say the bells at St. Ann’s.

Baedeker’s spells it St. Anne’s and lists two of them. One is in East London’s Limehouse: “St. Anne’s Church, with its conspicuous tower, was built by Hawksmoor (1730).” By the way, Limehouse gets its name from medieval lime kilns; it has nothing to do with Limey sailors.

The other St. Anne’s is in Soho, in Baedeker’s time as well as ours an entertainment district in Westminster. Baedeker’s noted, “Mozart, when a boy of eight years (March, 1763), lodged with his father and sister at 51 Frith Street leading to the S. from Soho Square.—In the churchyard of St. Anne’s, Wardour Street, are a tablet to Theodore, King of Corsica, who died (1756) in poverty nearby, and the grave of William Hazlitt (d. 1830).”

St. Anne’s Soho gets my vote for the Kettles and pans. Yours as well?

Baedeker’s identified Aldgate by its more fulsome “… the Church of St. Botolph Aldgate. The supposed head of the Duke of Suffolks (beheaded 1554) is preserved in this church in a glass-case (removed from the Trinity Church, see below).”

According to Wikipedia, “The church was one of four in medieval London dedicated to Saint Botolph or Botwulf, a 7th-century East Anglian saint, each of which stood by one of the gates of the City.” 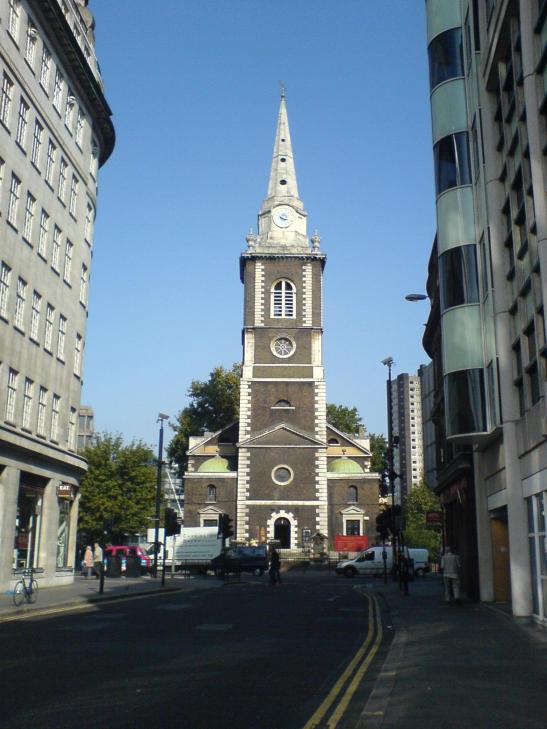 Maids in white Aprons
Say the bells of St. Catherine’s.

Baedeker’s calls it “Church of St. Catherine Cree, with an interior by Inago Jones, being the successor of an older church in which Holbein (d. 1543) is said to have been interred.” And, indeed, the older church on the site was founded in 1280.

You owe me ten shillings,
Say the bells of St. Helen’s.

Baedeker’s: “St. Helen’s Church (open daily, except Sat., 11.30–4) … was originally founded at a very early date and afterward became connected with a nunnery established about 1212…. In the N. wall of the latter may still be seen the arched entrance from the nunnery and (near the E. end) a curious hagioscope or squint….”

Well, yes. I looked up “hagiscope” and found it’s “another term for squint (sense 3 of the noun).” This particular squint is “an oblique opening through a wall in a church permitting a view of the altar from an aisle or side chapel.”

When will you pay me?
Say the bells at Old Bailey.

Baedeker’s identifies “Obliquely opposite Newgate [Prison], to the N.W., is the Church of St. Sepulchre, practically rebuilt in modern [1878] times, where a knell was tolled on the occasion of an execution at Newgate. At one time, a nosegay was presented at this church to every criminal on his way to execution at Tyburn.”

When I grow rich,
Say the bells at Shoreditch.

Baedeker’s observed, “The churchyard of St. Leonard’s, Shoreditch, now opened as a public garden, is the burial-place of many actors, including Shakespeare’s contemporary Richard Burbage (d. 1618).”

St. Leonard’s, Shoreditch. The earliest church on this site was referenced in the 12th century; this latest one, built in 1740.

Pray when will that be?
Say the bells of Stepney.

According to Baedeker’s, “There is a popular but erroneous belief that every British subject born on the high seas belongs to Stepney parish.” Wikipedia writes that St. Dunstan’s, Stepney, “stands on a site that has been used for Christian worship for over a thousand years.”

I know of this London neighborhood from the Rolling Stones’ “Play With Fire.” Mick sings about a girl’s mother who “gets her kicks in Stepney, not in Knightsbridge any more.”

I’m sure I don’t know,
Says the great bell of Bow.

“On the right (S.) side of Cheapside,” Baedeker’s described, “is the church of St. Mary le Bow, or simply Bow Church (so named after an earlier church on the same site borne by stone arches), one of Wren’s best works, with a tower 235 ft. high. The tower, at the top of which is a dragon 9 ft. long, is especially admirable…. Persons born within the sound of Bow-bells are popularly called Cockneys, i.e., true Londoners.” 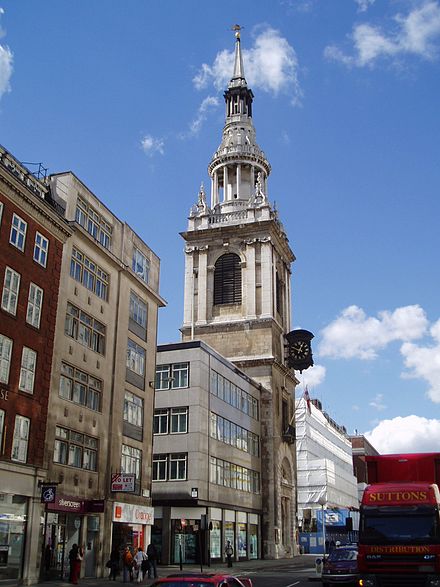 Gee, was it something I sang? ds