HOLMES ON THE WIRELESS PART 2 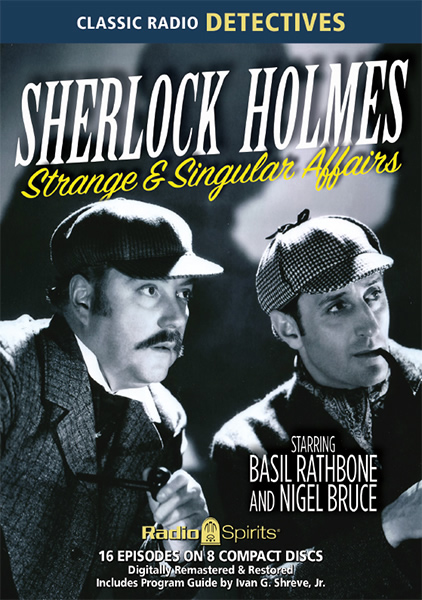 The Rathbone/Bruce Era. Basil Rathbone’s Holmes and Nigel Bruce’s Watson first appeared on the big screen in The Hound of the Baskervilles, 1939. From October 1939 through May 1946, the pair also entertained on the radio, first on NBC’s Blue Network (which eventually became ABC) and later on the Mutual Network.

Other Holmes; Other Watsons. Tom Conway (born Thomas Charles Sanders, older brother of fellow actor George Sanders) took over as Holmes in 1946-1947. Through mid-1950, other radio actors portrayed Holmes and Watson in network programs of similar format, Watson inviting the listener into his sitting room for a Holmesian recollection.

A Knighted Pair and Welles. From January 2 to June 5, 1955, the Baker Street pair and their arch villain had radio portrayals by Sir John Gielgud (Holmes), Sir Ralph Richardson (Watson), and Orson Welles (Professor Moriarty). Sir Ralph was knighted in 1947, the first actor of his generation to be so honored. Sir John was knighted in 1953.

A French Connection. Jim French, 1928–2017, and his wife Pat, 1929–2017, were a talented couple producing more than 800 radio shows out of Seattle as part of the Imagination Theatre. One of their creations, detective Harry Nile, has already made an appearance here at SimanaitisSays.

Radio Spirits has many of these in CD format.