WHAT’S THAT IN OLD ENGLISH? PART 2

YESTERDAY IN “What’s That in Old English Part 1,” we concluded with edhwierfe!, the Old English verb “to return” in its imperative singular case. Given that you have returned, today let’s continue with “What the Earliest Fragments of English Reveal,” by Cameron Laux, BBC Online, January 18, 2019, and its review of the British Library’s exhibition, Anglo-Saxon Kingdoms: Art, Word, War.

A Heroic Beowulf. The single greatest literature of Old English, OE for short, is the folk-epic poem Beowulf, produced between 975 and 1025 A.D.

The poem consists of 3182 alliterative lines, so expect only a brief summary here. Beowulf the hero comes to the rescue of Hrothgar and his family being terrorized by troll-like monster Grendel. Said to be descended from the biblical Cain, Grendel is also the son of Wealhtheow, who is Hrothgar’s wife.

Bad Scene, but we Wagnerians are never shocked by such familial matters.

In The First Battle: Grendel, Beowulf uses his bare hands to tear the monster apart, which doesn’t exactly endear him to Grendel’s mom.

In The Second Battle: Grendel’s Mother, Wealhtheow is tracked down to her lair under a pond (no surprise, this location). She and Beowulf engage in fierce combat, and he arrives topside with a broken sword and her bloody head. Hrothgar rewards Beowulf with a new sword and a long sermon urging him to be wary of pride.

In The Third Battle: The Dragon, fifty years later, Beowulf is king of his own people, one of whom steals a cup from a dragon. The dragon retaliates by burning everything in sight. Beowulf boasts he’ll fight it alone, but finds himself outmatched.

Trusty pal Wiglaf comes to his aid, they slay the dragon, but Beowulf is mortally wounded. He is ritually buried on a great pyre and a huge earthen barrow is built in his memory. How huge? The barrow occupies Beowulf lines 2712–3182, 15 percent of the poem.

OE Grammar Tidbits. Like German, OE depends on declensions identifying grammatical case, number, and gender. Modern English remnants of this are I/me/mine, she/her, and who/whose/whom. This last trio is all but dying, y’know?

Because of specificities of declension, OE word order is less important than in modern English. Think of Jedi Master Yoda: “When nine hundred years old you reach, look as good you will not.”

Another OE characteristic is its negative concord, in which double negatives are permitted and reinforce each other. In modern English we eschew double negatives (“I haven’t got no…”), but we’re the outlier in this regard.

Blame Those Frenchies. In 1066, the French defeated the English at the Battle of Hastings. In rampaging troop fashion, Norman French had its way with Old English, the result being Middle English, a love child of the two.

Geoffrey Chaucer, c. 1343–1400, had no problem with negative concords. From Canterbury Tales, the Friar’s Tale: ”Ther nas no man no wher so vertuous,” “There never was no man nowhere so virtuous,” a triple negative! 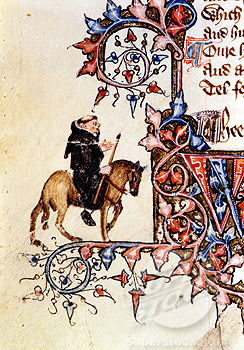 The Friar from the Ellesmere Manuscript of Chaucer’s Canterbury Tales.

Thank the Lord. Here’s The Lord’s Prayer, in West Saxon OE. A literal translation follows below.

Father of ours, thou who art in heavens,
Be thy name hallowed.
Come thy kingdom,
Manifest thy will, on earth as also in heaven.
Our daily loaf do give to us today,
And forgive us our guilts as also we forgive our guilters.
And do not lead thou us into temptation,
But deliver us from evil.

OE’s Legacy. According to Wikipedia, “Perhaps around 85 percent of Old English words are no longer in use, but those that survived are basic elements of Modern English vocabulary.” Nevertheless, modern English traces perhaps half its words to OE (for example: ale, baby, cat, and others at Wikipedia List.

I apologize for the resulting time-gobble. Welcumen! ds