Connie Finds Peacetime Employment. The Connie’s first transatlantic flight was a TWA test run on December 3-4, 1945, from Washington, D.C., to Paris via Gander, Newfoundland, and Shannon, in western Ireland. Regularly scheduled service began February 6, 1946, with the travel in 19 hours 46 minutes.

Gander and Shannon stopovers continued as part of Connie transatlantic service until March 1947, with introduction of the L-749 variant with larger wing tanks.

Lockheed Constellations, L-049 and stretched L-1049. This and a following image from World Aircraft Commercial 1935–1960.

A Stretch, and More Power. In 1950, the L-1049 Super Constellation arrived. An 18-ft. 4-in. stretch of its fuselage and rectangular windows in the cabin were the most evident changes. In some configurations, the Super Connie carried as many as 106 passengers, up from the L-749’s 60–81. Configurations of either with overnight berths might reduce this to 43-48. 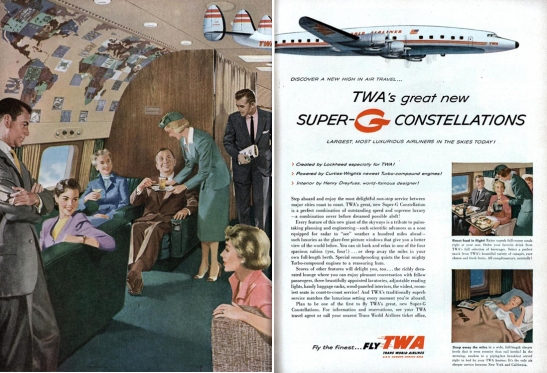 Subsequent models were powered by Turbo Compound versions of the Wright R-3350 18-cylinder twin-row air-cooled radial. Output of this 55-liter powerplant increased from the Connie’s 2200 to Super Connie’s 3250 hp. Eventually, output reached 3400 hp and range was enhanced by addition of wingtip fuel tanks. 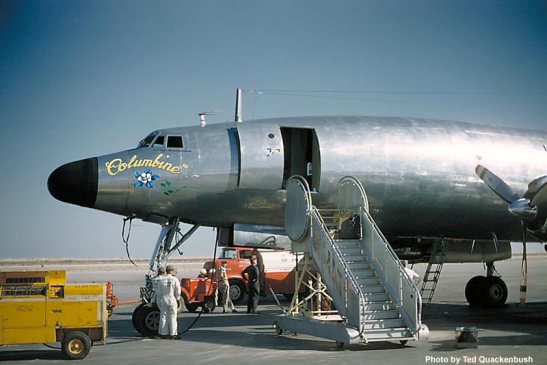 It was during Eisenhower’s administration that the call sign “Air Force One” was adopted. Toward the end of his administration, in 1958, three Boeing 707 jets were added to the presidential fleet.

A Coming Jet Age. By the early 1960s, Connies in commercial use were being swapped for Boeing 707 and Douglas DC-8 jets. The last Super Connies flying commercially into the U.S were based in the Dominican Republic. In 1993, the Federal Aviation Administration banned them.

The westbound flight took about 48 hours. Passengers going either way had the option of unlimited stopovers provided the entire trip was completed within 180 days.

According to nomadicmatt.com, various airline alliances today offer Round The World tickets, the cost $2700–$15,000 depending upon route, class of fare, and number of stops. The website says a simple two- or three-stop itinerary might cost as little as $1500.

2 comments on “CELEBRATING THE CONNIE PART 2”