HERE’S PART 2 of my tidbits gleaned from “Tempering the Utopian Vision of the Mobility Revolution,” by Craig A. Giffi, Joseph Vitale Jr., and Ryan Robinson, one of the articles in Deloitte Insights: Express Lane Ahead. Yesterday, these Deloitte specialists addressed whether consumers care about electrification of automotive propulsion. Today, vehicle autonomy, connectivity, and shared transportation are addressed.

This, images following, and information from Deloitte Insights: Express Lane Ahead.

Putting the Brakes on Autonomous Vehicles. The Deloitte writers note, “Widespread coverage of even the very small number of accidents involving AVs may be shaping public perception, with nearly two-thirds of consumers in Republic of Korea, the United States, India, and China agreeing that media reports of accidents involving AVs have made them more cautious of the technology.” 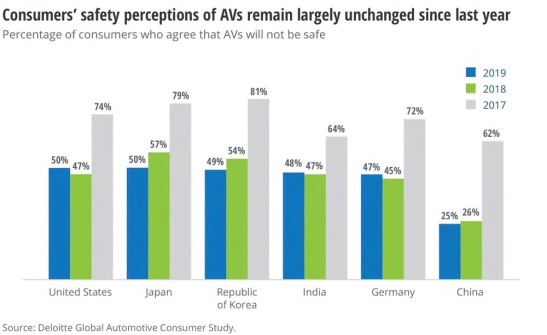 “Consumers,” the writers suggest, “also want governments to up their regulations game.” What’s more, on a business note, “consumers are turning to existing technology companies…. This trend is troublesome for automakers making enormous investments to develop AV features, and fortuitous for new industry entrants that are looking to disrupt the mobility space.”

Who Pays for Connectivity? Smart cars, of course, come at a price and consumers have questioned the cost-benefit ratio of such car-to-car and car-to-infrastructure connectivity. “In Germany,” the writers note, “43 percent of consumers said they would not pay any more for a connected vehicle, and another 40 percent said they would pay only up to €600 more.”

Would You Still Love Your Ride-hail? Deloitte authors observe, “There are a few ‘immutable truths’ about consumer behavior: (1) Consumers are unwilling to compromise, (2) their usage patterns are difficult to change, and (3) they don’t like sharing.”

“Even ride-hailing,” they note, “which is often held up as the epitome of the new mobility-as-a-service (MaaS) transportation model, has experienced an interesting transformation over the last few years. In 2017, 23 percent of U.S. consumers used ride-hailing at least once a week, and another 22 percent used it occasionally. Fast-forward to 2019 study results, and the percentage of regular users has halved, while the proportion of occasional users has increased twofold. China and India are no different.”

Summarizing It All. The Deloitte authors conclude, “Encouraging younger consumers to embed new mobility behaviors into their daily routines may be the only way to get to an integrated, electrified, shared future of mobility, assuming industry players can hold out long enough for that transformation to take place.”

As Bette Davis said in the 1950 movie All About Eve, “Fasten your seatbelts. It’s going to be a bumpy night.” ds