LONG BEFORE there were Porsches and Corvettes, decades before Mustangs and Miatas, there was the MG TC. So the story goes, G.I.s returning after World War II brought home these sporting little English roadsters. In time, England brought us the upmarket Jaguar XK-120 too, renowned for its guaranteed top speed of 120 mph. But it was the MG TC, already an old-fashioned design by 1949, that defined the meaning of sports car for so many of us.

This and the following images from R&T, October 1956.

Savoring premature nostalgia in October 1956, R&T assembled a Salon article as well as a Classic Test of the MG TC. Indeed, noted R&T, “For some unaccountable reason, there has never been a road test of an MG-TC published in Road & Track.”

Their excuses: The TC had already been superseded by newer, albeit still traditionally styled roadsters, the TD in 1950 and TF in 1953, and by the all-enveloping-bodywork MGA in 1955.

Even with its “hood” erected, the MG TC had a rakish air. Its wire wheels and tall, skinny 4.50-19 tires were part of this.

“But these are flimsy excuses,” R&T confessed, “and the hard fact remains that only now—nearly ten years after our first issue—are we finally paying homage to the one car above all others that kindled the spark of the post-war sports car movement in the U.S.A.”

Accompanying the Salon was an R&T Classic Test: “The following nostalgic report was put together from notes made by the Editor [John R. Bond at the time] over six years ago and the data was taken from an actual car, which belonged to Mrs. Bond.” Neither John nor Elaine knew it in 1956, but her TC was to hold a place of honor in R&T’s new building in 1968.

The MG TC’s steering was 1.7 turns lock-to-lock, whereas cars of this typically non-assisted era required more like four turns lock-to-lock. “High speed stability,” R&T observed, “is not too good and requires alert attention to the steering on narrow roads. One run, downhill, at 90 mph indicated, proved this—keeping a safe straight course at this speed being almost impossible.”

The downhill must have been pronounced, as the TC’s best run on the level was 78.9 mph. What’s more, with a 0-60-mph time of 21.3 seconds, this top speed didn’t come particularly easily. The TC’s standing quarter-mile arrived in 21.8 seconds at just a tick beyond 60.

The TC’s 1250-cc overhead-valve four produced a modest 54.4 hp at 5200 rpm. R&T reported mileage of 22-28 mpg, which reminds me of a wonderful line from British car PR man Mike Cook, who, rest his soul, died just recently: When chided that one of his products got less than stellar mpg, Mike said, “Do you think it’s easy to cram all that fuel through that itty-bitty four-cylinder?” 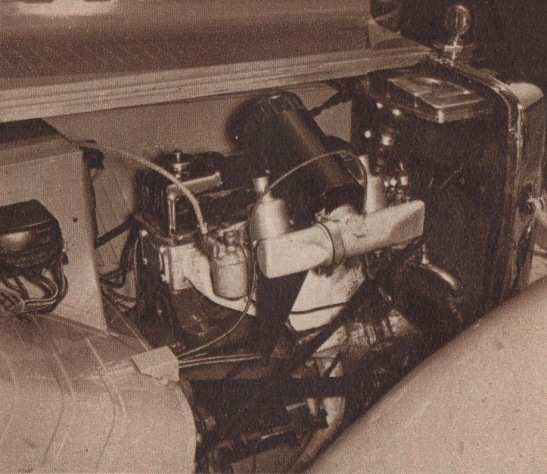 The modest propulsion, though, made adept shifters of us all: “A gearbox that must be used properly, and can be, is something new to us but it soon proved to be a sheer pleasure. With a foolproof synchromesh on the 3 upper ratios, one anticipates the need of the next moment and employs the British ‘downshifting’ technique.”

R&T continued, “If the proper gear is selected (high is not enough), a corner can be taken with a beautiful drift with very little ‘sawing’ of the steering wheel.”

“TCs came with right-hand drive,” R&T reported, “but having tach and speedo widely spaced was more symmetrical than practical.” Other cars of the era shared this form over function.

In the Salon, R&T put things in perspective: “… during the years of taking the TC for granted, it has slowly changed from contemporary to classic…. Nowadays [in 1956], there is an almost unanimous feeling among sports car people that the TC represents the high-water mark of MG achievement. There are MGs that are faster, roomier, far better riding, quieter—but there has never been a model that stood for so much that is ‘thoroughbred’ about a sports car.”