THE COMEDIC NOVELS of Caryl Brahms and S.J. Simon, principally their Stroganoff ballet mysteries, were topics here at SimanaitisSays more than four years ago. Recently, I’ve read Trottie True, another Brahms and Simon delight that got only a brief mention back then: I scammed from its cover blurb, “Edwardian madcap…. Gaiety Girl Trottie True whistles through Mayfair like a human cannonball.”

As comedic relief these days, I offer more from this charming book.

Trottie’s story is told in a series of flashbacks from a 1910 London society wedding, at the end of the Edwardian Era. By this time of her life, Trottie is the Duchess of Wellwater, matron of honour to Honor Bellairs, described as “the current bride,… a dear child.”

Honor’s mother, “irreproachably born, had irreproachably died; her father was a far-flung governor of our sun-static empire. She had good looks and good manners, though there was a distinct tendency to flat-chestedness combined with an obstinate refusal to pad.”

Trottie makes her professional debut as “The Great Little Trottie” at the Old Bedford in her London neighborhood of Camden. Camden Town is a mere two miles across Regent’s Park from Mayfair. However, the Bedford Music Hall and its raucous gallery is a far cry from the Gaiety Theatre, known for its Gaiety Girls and their tony swains gathered around the stage door.

The Bedford, 93-95 Camden High Street, Camden Town. “Every Turn a Top of the Bill.” Image from arthurlloyd.co.uk.

Trottie proves her mettle at her Bedford audition: “Christ Almighty, an infant prodigy! ‘Take your music to the piano,’ called the shirt-sleeves, resigned.
‘Haven’t got any music,’ said Trottie.
Christ Almighty, she was going to recite! The shirt-sleeves went into a daze. Who said he didn’t earn his salary?
But Trottie had crossed to the pianist. ‘Do you,’ she asked anxiously, ‘know the old Bull and Bush?’
‘Do I!’ said the pianist….
Trottie’s confidence came back with a rush.
‘You listen,’ she said. She started to strut.
The shirt-sleeve came to with a jerk. Christ Almighty, he was joining in the chorus!”

Trottie advances quickly from delighting music hall galleries to being offered a “legit” job by George Edwardes, an actual entity of the era’s London entertainment scene. Edwardes’ refined comedies presented at his Gaiety Theatre were precursors of Broadway musicals.

No playing to the galleries any more, Trottie. There are young members of the peerage in the better seats. 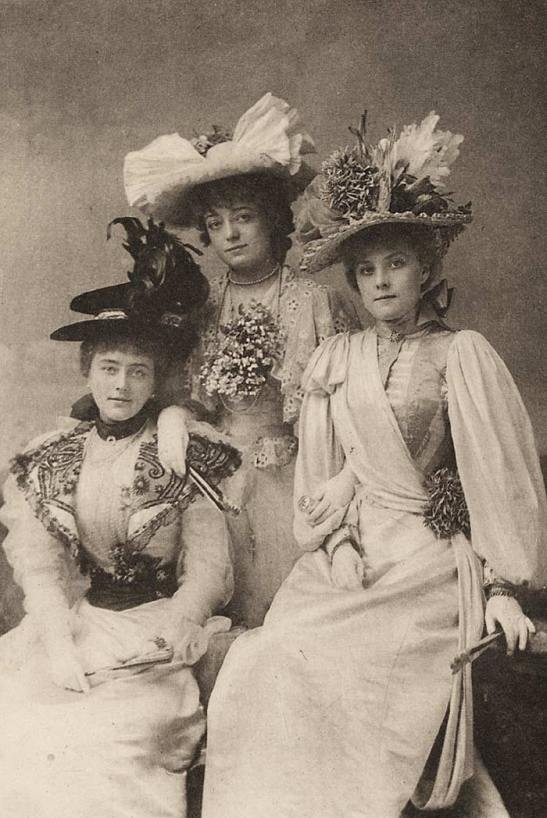 Gaiety Girls, 1896, a bit before Trottie, but equally glamorous.

Edwardes made a real-life deal with Romano’s Restaurant on the Strand for his Gaiety Girls to dine at half-price. The restaurant became the center of London night life. 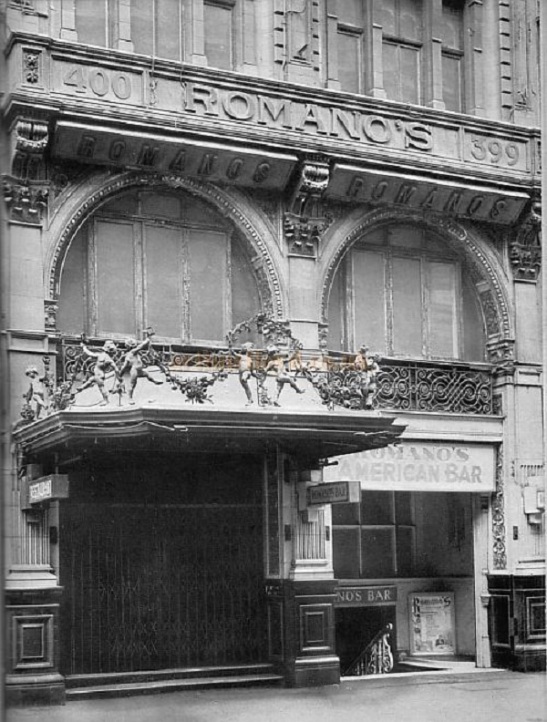 Needless to say, Romano regulars included Trottie and her friend Bouncie Bonnington, yet to become Lady Maidenhead, later to run off with the chauffeur.

“Trottie was stunned. ‘Oh poor Bouncie,’ she said. ‘What can have made her risk her emeralds like that?’
Maurice shook a sad head. ‘Chauffeurs,’ he prophesied, ‘are going to be a menace.’ To people like me, he suppressed.”

Motor cars and balloons are recurring themes in Trottie True. For example, the Wellwater family’s driver, known to Trottie and us as Old Vinegar, is “an august and die-hard coachman (he would not bring round the electric brougham whatever they might say!)….”

Sid Skinner, one of Trottie’s true loves, is a balloonist. In fact, she even goes up with him. “Well, if it isn’t one of them perishing balloons coming down again, thought a farmer as he hurried across his seedlings to where he estimated the rare old nuisance would fall. Never be rid of them, he grumbled to himself.”

I’ve already mentioned that Trottie ends up as the Duchess of Wellwater. I reveal only a little more by saying that Sid ends up married with a nice little place in Surbiton: “ ‘Oh,’ said Sid casually, but avoiding her eye, ‘I’ve given up the balloon…. No future in it, anyway,’ he betrayed his soul.”

But our Trottie never betrays hers. What a delightful book! ds