FROM THE RIO GRANDE TO THE CANAL ZONE PART 1

THE PAN AMERICAN Highway at different times means different things to different people. In today’s news, it is the arduous south-to-north trek of asylum seekers. To motorsports enthusiasts, there was the Carrera Panamericana, the Mexican equivalent in 1950–1954 of Italy’s Mille Miglia road race. And to the Prince of Vagabonds, Harry Franck, The Pan American Highway was a 1940 travelogue subtitled “From the Rio Grande to the Canal Zone.” 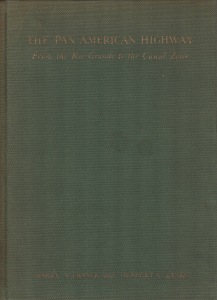 The Pan American Highway, From the Rio Grande to the Canal Zone,

Harry Franck had begun detailing his world travels in 1910 with A Vagabond Journey Around the World. By 1940, he had written 23 more travel books, including his Panama adventure Zone Policeman 88, 1913; Tramping Through Mexico, Guatemala, and Honduras, 1916; and Trailing Cortez through Mexico, 1935.

Franck’s 24th travel book, published in 1940, was co-authored with photographer Herbert C. Lanks: “Strictly speaking,” they wrote, “the Pan American Highway is the one that is some day to connect Fairbanks, Alaska, (if not, indeed, Asia, by a tunnel under the Bering Strait!) with Cape Horn…. Meanwhile, those of us who cannot wait so long will find that part of it between the Rio Grande and the Canal Zone one of the most interesting and scenic journeys in the New World.”

Franck and Lanks’ 1940 route from Nuevo Laredo to the Canal Zone. This and the following images from The Pan American Highway.

“Just about half this so-called ‘Inter-American Highway’ runs through Mexico; the other half crosses Guatemala, Salvador, Honduras, Nicaragua, Costa Rica, and the northern half of Panama. On this drive of about the same distance as from Boston to San Francisco, one passes through arid deserts, dense tropical jungles, over lofty mountain passes with breath-taking views, past active volcanoes, and into the shadow of perpetually snow-capped mountain peaks three miles high.”

Tidbits gleaned from the book follow in three parts. Today we’ll get as far as the Mexico highlands. Tomorrow we’ll continue our travels into Guatemala and points south. Then on to Panama and its Canal Zone.

“There are no formalities involved in leaving the United States for Mexico, and even on the Mexican side the frontier formalities are brief and simple. Almost before you realize it, you are on your way south…. Nuevo Laredo is not exactly a typical Mexican city, though there are many things typically Mexican about it. A mere village of dusty streets and sleepy inhabitants until then, it had mushroom-like growth during our Prohibition era.”

“The new bridge across the Rio Grande has removable railings for times of flood.”

”Billboards are unfortunately increasing along Mexico’s highways, though it will probably be a long time before the route to Mexico City becomes such a gauntlet of urgings to spend your money as are American highways…. What you can’t do much about are the huge names of political candidates painted on buildings, rocks and other prominent vantage points along all important roads in Mexico. Just an old Mexican custom, serving to remind us that our own politicians have so far overlooked one other way to annoy us.”

On wildfowl. “Besides the occasional buzzard soaring overhead, the bird most likely to attract attention is the chaparral-cock or road-runner. Speckled gray or black, with a long neck, long tail, and even longer legs, its chief interest in life seems to be in crossing the road at the last possible moment.”

“Scenes on the Pan American Highway.”

”Tortillas are eaten much like bread, but the Mexican version of Emily Post demands that it be torn to pieces with the fingers instead of with the teeth…. At railroad stations and similar places, tortillas are often sold with various kinds of chopped meat and vegetables rolled up in them, when they are known as tacos.”

We pause with this familiar meal and resume our travels tomorrow. In particular, we stop when the traffic policeman is ”en perfil,” discover why Guatemala had the most complete network of highways in Latin America, and learn about an aviation-savvy Honduras. ds