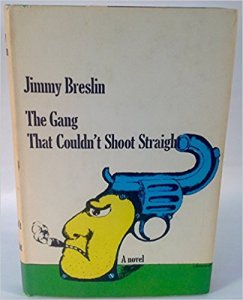 The Gang That Couldn’t Shoot Straight: A Novel,

On the other hand, I enjoyed Jimmy Breslin’s The Gang That Couldn’t Shoot Straight: A Novel. I’ve savored Damon Runyon’s tales of Nathan Detroit, The Lemon Drop Kid, Dark Dolores, Sam the Gonoph, and others of their ilk. It was Sam the Gonoph who philosophized “I long ago come to the conclusion that all life is 6 to 5 against.” 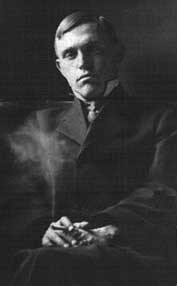 Also, completing my modest mob links, when I was teaching mathematics at the College of the Virgin Islands on St. Thomas, I once flunked a student whose family was highly connected in New York Mafia circles.

I am not completely ignorant of the lingo. Capiche?

Today’s political shenanigans bring the lingo all back. To quote James Comey, “As I found myself thrust into the Trump orbit, I once again was having flashbacks to my earlier career as a prosecutor against the Mob.” 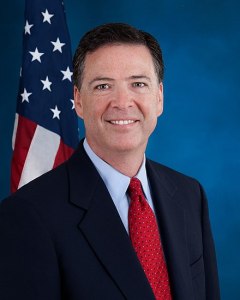 What follows here is Part 1 of selected mob talk, with relevant etymologies here and there. Tomorrow is Part 2.

Babbo. An underling no longer useful, an idiot. Ironically, it’s also Italian for “Daddy.” I mean, really, where’s the respect?

Borgata. A crime family. Literally in Italian, a “township.”

Cafone. An embarrassment to himself and others. Literally in Italian, a boor. Perhaps related to “covfefe”?

Capiche. Short for “Do you get what I’m saying?” From the Italian verb capire, “to understand.”

Capo. Literally “head” in Italian. A ranking member of a family, the head guy of perhaps 10 soldati, soldiers. 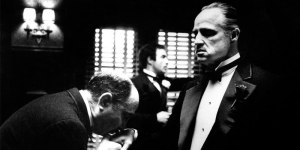 Loyalty is important to a capo di tutti capi. Image from The Godfather, 1972.

Geez, here I am not even through with the C’s. I conclude today with an appropriate phrase, Che Peccato!, apparently uttered in mob circles when viewing an ex-member: “What a pity!”