THOSE OF us driving in developed countries take for granted the cues painted on streets and roads: turn lanes, crosswalks, bikeways, and the like. In Britain, pedestrians arriving from elsewhere are all the safer because of LOOK RIGHT markings reminding that Brit drivers come from the “wrong” direction.

Assistant Editor Alice Spawls of the London Review of Books writes that Brit streets and roads “have their own language, even their own typography” in her article “On the Road,” LRB, February 8, 2018. Here, I glean tidbits, both historical and modern day.

The first one-way streets in London, Spawls notes, “were introduced in 1617 by the Worshipful Company of Carmen (their cars were carts). Most street signs date from the invention of the bicycle, but the Motor Car Act of 1903 brought in four abstract shapes: A white ring (for speed); a diamond (for information like weight limits); a red circle (for restrictions); and a red triangle (for warnings).”

A charming image, alas, no longer used, is a burning torch of knowledge designating a school zone.

Markings on the roadway itself didn’t appear until 1918, “when Britain became the first country,” Spawls claims, “to paint a white line down the middle to keep cars from colliding. Pedestrian markings appeared later, during World War Two, when the edges of roads were whitened so that people could see them in the blackout.”

Nearly all the lettering and shapes are hand-painted, some “short, fat-bottomed arrows with an even triangle for the head, others … long stems topped with a flashy inverted ‘V.’ ” White lettering is common, but other colors include red (bus lanes) and green (bike zones). In fact, Spawls’ article displays a multi-hued image of street markings likely “made by contractors, instructions for workmen, and guides for what lies beneath the tarmac… their spiraling constellations and codes—Top T, HC, 0-44, dot, dot, line, dot, zigzag—read like a glorious childish nonsense.” 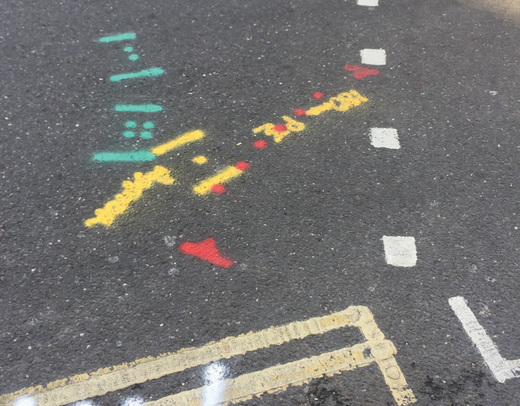 Spawls rides her bicycle around London and thus has particular appreciation for bike lane designations. “The bicycle symbols,” she recalls, “that were painted in Islington four of five years ago (that’s as long as road paint lasts) showed rather elegant, long, square wheeled machines with tapered racer handlebars curving back like ibex horns. They only remain as ghosts now and have been replaced with a new shape, rounder and with the fussy addition of pedals.”

“In Paris, the bikes are drawn with riders, which seems too descriptive.” Zut alors!

For awhile, Spawls eschewed topside travel for the London Underground, which to her offered all the exciting destinations. Then, she learned, “But there are unexpected delights to be had on tarmac, and not only the delight of looking around. The street passes like a film reel beneath you.”

On one of her London bicycle jaunts, Spawls encountered a “hot pink graffiti on the road behind Sadler’s Wells that says ‘I miss your farts.’ It’s the only road graffiti I know, and it’s very cheering. I took an American friend to see it last year, but he wasn’t impressed. So much for him.”

I suspect I would have giggled at the whimsy of it all. ds

2 comments on “READING THE STREET—BRIT STYLE”

This entry was posted on March 11, 2018 by simanaitissays in Just Trippin' and tagged "On the Road" Alice Spawls LRB, British street and road markings, London Review of Books.