EL CENTRO, once renowned as the Lettuce Capital of the World, is in California’s Imperial Valley, about 115 miles east of San Diego and 15 miles north of the Mexican border. Whereas San Diego sparkles with the Pacific Ocean, the Imperial Valley’s bountiful yield of year-around crops depends on a river that, miles upstream and eons ago, carved the Grand Canyon.

one of her books, bristles with tidbits about the place and its people. A tough bunch, desert rats, even tougher back when the Imperial Valley developed relatively late among U.S. locales, a century ago. 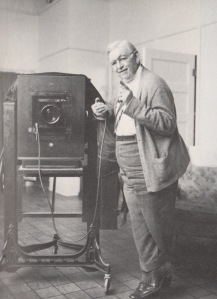 Leo Hetzel arrived in the Imperial Valley in 1915, his camera at the ready. During a 34-year career, he captured Kenyon’s El Centro Plunge, Daredevil Cathey’s 100-hour marathon drive, the refrigerated Barbara Worth Hotel, the region’s plank road, its speakeasy casinos just across the Mexican border, and a lot more.

Here are photographic examples, with annotations by the Ditchbank Girl, Wife Dottie.

Above, the Barbara Worth Hotel, built in 1915 and named after the heroine in Harold Bell Wright’s novel, The Winning of Barbara Worth. Below, its lobby, with murals painted by Chicago artists Luvena Buchanan and Edward Vysekal. 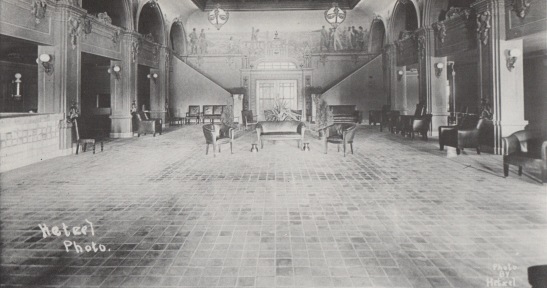 The Hetzel book describes the Barbara Worth Hotel as “The Valley’s showcase of extravagance.” Long before modern air conditioning, it was “Completely Refrigerated” by circulating ice water through an extensive network of pipelines. 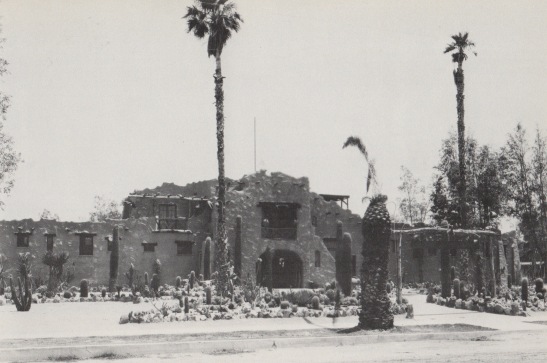 The El Centro Plunge, the community swimming pool, had a facade modeled after the Alamo.

Ditchback Girl remembers taking swimming lessons at The Plunge, but learned to swim in an irrigation canal. We know of another community pool with a sign that says The Plunge, in Brea, California. Is The Plunge a California thing? Or common elsewhere in the country?

Border formalities were rather less elaborate than today’s. However, early on, temperance types forced a 9 p.m. closure to encourage their menfolk homeward.

The Owl Casino, one of Mexicali’s “palaces of chance.”

According to the Hetzel book, Mexicali “was established when a shack was set up just south of the border to quench Valleyites’ thirsts with bootleg Mescal.” In fact, this Mexican city has always been considerably larger than El Centro.

Ditchbank Girl’s father never hung out there. Indeed, a family tale has it that he once stepped into an El Centro bar for a cool refreshment while her mother and Dottie were grocery shopping. Young Dottie was so shocked seeing Daddy exit the place that she sobbed uncontrollably all the way home. (She was probably a pest in other ways too.)

The single-lane plank road had turnouts every quarter-mile, on the off-chance of encountering another car.

Plank roads made an appearance here at SimanaitisSays. Ditchbank Girl’s mother remembered riding on this one, east of El Centro near Yuma, Arizona.

Ditchbank Girl and her high-school friends felt a frisson (though the time and climate likely precluded this term) when larking around the abandoned Yuma Prison and seeing “the pit.” So the legend went, troublesome prisoners were thrown into this hole, which was then topped with corrugated steel to offer sweltering confinement.

Desparados, horse thieves, and others “skirting standards of societal responsibility” spent time in the Yuma Territorial Prison, located on the east side of the Colorado River in Arizona.

It was years later that a Park Guide told Wife Dottie and me, “Oh, you must be from the Imperial Valley. Actually, the pit was dug for an early movie.”

Dance Marathons were the big thing in the Thirties. Getting in the spirit and sponsored by a local car dealer, “Daredevil” Cathey drove a car for 100 hours straight. Cathey finished things off with a nap in full display in the dealership showroom. 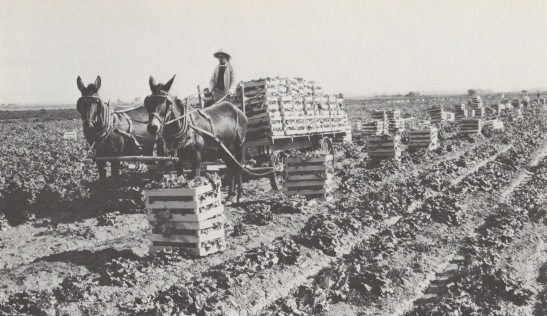 El Centro was known as the Lettuce Capital of the World.

The ubiquity of lettuce in Ditchbank Girl’s youth may hint at why she avoids it today in any salad, sandwich, tostada, taco, or other food. She remembers when a dump truck would deposit a pile of “cull” lettuce into a cow pasture. Cull lettuce was smaller than the big, round heads sent to the markets.