SNIFFING OUT A MYTH

IT IS CONVENTIONAL wisdom that many mammals, dogs especially, have far better senses of smell than humans. However, recent research suggests that this is a myth perpetrated by 19th-century science with ecclesiastical and government influences.

Professor John P. McGann specializes in Behavioral and Systems Neuroscience in the Psychology Department, Rutgers University, Piscataway, New Jersey. His paper “Poor Human Olfaction is a 19th-Century Myth” is in the May 12, 2017, issue of Science magazine published by the American Association for the Advancement of Science.

McGann writes, “This Review traces the scientific history of this idea to 19th-century neuroanatomist Paul Broca.” Broca was a prominent anatomist and anthropologist in the Medical School at the University of Paris, an institution denounced by the Catholic Church in France for teaching “atheism and materialism.” Broca is best known for his identification of a region in the brain’s left frontal lobe, now called Broca’s Area, involved in language processing.

Broca, sympathetic to the theories of Charles Darwin, once remarked, “I would rather be a transformed ape than a degenerate son of Adam.” This and other of his views, secular education for women, for example, caused Broca to be labeled a free-thinking corruptor of youth.

McGann writes that Broca’s anatomical study of the brain “led him to conclude that rather than having the disembodied soul espoused by his religious contemporaries, the ‘enlightened intelligence’ that uniquely defined humanity could be physically located in the frontal lobes of the human cerebral cortex.”

Taking this one step further, Broca recognized that the olfactory bulb, responsible for smell, was a considerably smaller proportion of the human brain than it was in other mammals. He associated this to human free will, as opposed to the odor-compelled behavior of lower animals.

Others picked up on this, including Sigmund Freud who thought that smell was “usually atrophied” in humans. McGann writes, “Freud posited that smell evoked instinctive sexual behavior in other animals, but in humans the putative loss of smell caused sexual repression and enabled mental disorders, particularly if one ‘took pleasure in smell.’ ”

McGann sums up, “Freud and Broca thus provided a pseudoscientific gloss on the idea that smell operates in opposition to a disembodied rationality that makes humans civilized and distinct from other mammals.” 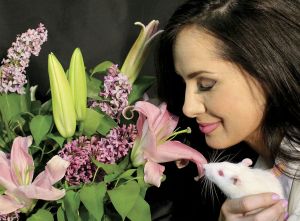 On the other hand, recent research suggests that humans can differentiate among a trillion different odors. Also, it’s conjectured that our wiring for smell sets us apart from other mammals: Olfactory information also travels to portions of the human brain involved with emotion and memory.

It has also been shown that our noses are more sensitive than those of other mammals to particular odors, that of human blood, for instance. 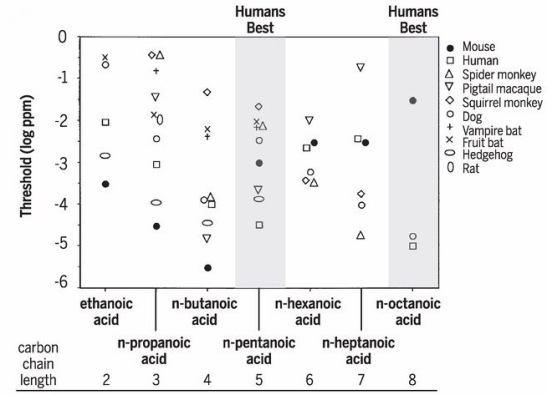 Sniffing n-pentanoic or n-octanoic acid? (Both used in perfumery.) Humans are best at it.

Another argument against inferiority of the human olfactory sense is an absolute one, rather than a proportional one. Across a wide range of mammals, including rats, elephants and humans, the number of olfactory bulb neurons is relatively uniform.

Our brains are larger; our olfactory bulbs aren’t that different from those of other mammals.

What about a dog’s renowned expertise for searching out a scent? It’s said, in a sense, that dogs smell in 3D.

McGann notes research in human scent-tracking experiments performed at the University of California Berkeley. “They blindfolded undergraduate subjects and gave them earmuffs so they couldn’t use any senses other than smell.” [See the video that’s part of this link.] “They found the students were perfectly capable of following a trail laid out in a field.” 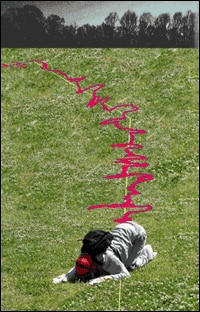 A smell-focused test subject at University of California Berkeley follows a scent.

McGann says, “The study didn’t test humans and dogs head to head—I think the dogs might win depending on the odor—but what it shows is the limits of human smell tracking haven’t really been investigated.”

Conventional wisdom has been around for 150 years that humans can’t smell very well. McGann concludes, “I’ve seen terrible misinformation about smell in intro psychology textbooks even last semester. But I really hope that this is the beginning of the end of this myth.”

Science is a process; it’s never over. ds

This entry was posted on May 23, 2017 by simanaitissays in Sci-Tech and tagged "Poor Human Olfaction is a 19th-Century Myth" John P. McGann, Berkeley human tracking by scent, Broca's Area, human sense of smell not inferior, Paul Broca.