THE Lotus Seven America is the John Adams of automobiles: Like this composer of Short Ride in a Fast Machine, the Seven is minimalist. It has nothing more than it requires to perform its function: to entertain, to enlighten, to accomplish a lot with a little. 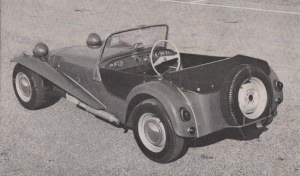 1961 Lotus Seven America. The “doors” are completely removable, there to meet race-car regulations. This and the following images from R&T, July 1961.

Wrote R&T road testers in July, 1961, “As a design, the machine is rather dated; it is a development of the old Lotus Mark 6, which was the first of Colin Chapman’s creations to reach series production.” The Seven shown here got its America moniker through its sweeping front fenders, substituted in place of the English version’s more rudimentary, albeit less handsome, cycle counterparts.

These front fenders, the rear ones and the nosepiece are of fiberglass. The rest of the Seven’s structure is minimalist indeed: flat sheets of aluminum riveted to a frame composed of round and square-section tubes, “all having wall thicknesses of less than 0.050 in.” Not quite paper-thin; nor overly robust.

This certainly made for a lightweight design. The Seven’s curb weight was an amazing 960 lb. A good thing too, because the car’s mechanicals were borrowed from a mundane assortment of underpowered English sedans. The 948-cc overhead-valve four-cylinder engine and four-speed gearbox came from the Morris Minor 1000. The rear axle, drum brakes, wheels and front suspension were from the Triumph 10 sedan.

Redesigned intake and exhaust manifolds and dual SU carburetors were the only “racey” upgrades, and R&T used this adjective in the relative sense. The Seven’s engine produced 40 hp at 5000 rpm; a stock Morris Minor had 38 hp at 4750. 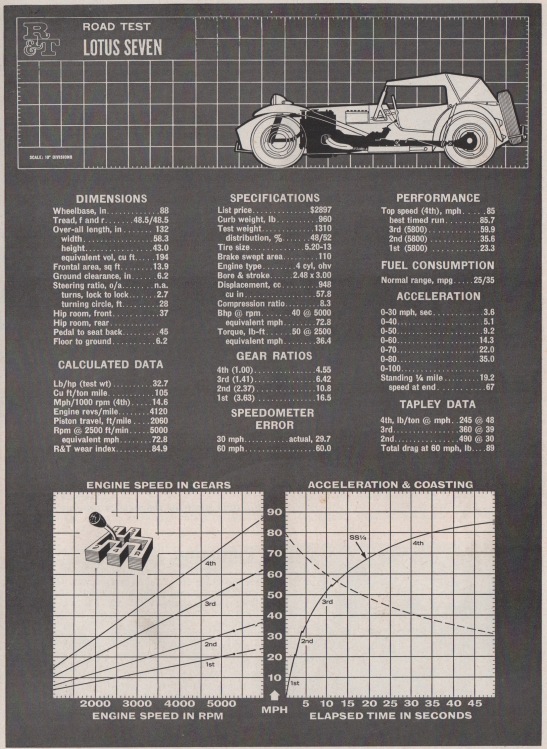 The Seven, R&T reported, “makes the sort of standing start that we dream about. It goes from the mark with the wheels spinning just enough to keep the revs up and no skill at all is needed to get the car’s very best.”

Note the Seven America’s drum brake. (So what’s there to stop?)

What’s more, straight line wasn’t the Seven’s metier. It was in changing direction that the Lotus blossomed. Springing at all four corners depended upon coil springs in concentric units around the shock absorbers, far from ubiquitous in those days. R&T testers didn’t complain of the rock-hard ride: “The spring rates would be much lower if only street use were contemplated but these are just perfect in the use for which the car was designed.… Fast bends or slow, the Seven sticks marvelously well and will allow its driver almost any blunder.”

Except, perhaps, for my physique. Years later, I drove Sevens at enthusiastic speeds, albeit not for great distances. In the engineering sense, not just the journalistic one, I am a press fit into the Seven’s cockpit. Once squirming to get behind this particular test car’s oversize steering wheel (cribbed from some English sedan), one sits on an only lightly upholstered floor, legs out front in a narrow tunnel leading to the three pedals. 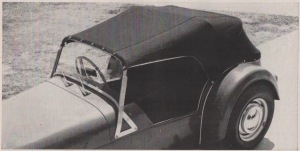 Don’t try getting in one at home, kids; we’re professionals.

“There is a top furnished with the Seven,” the 1961 R&T testers noted, “and it is not difficult to erect, but our experience with the car convinced us that it should be regarded as a desperation measure only…. As we have said, the Seven has no doors, and with the top in place one has to enter the car through the window opening. This really isn’t too difficult a feat, but it is one of those things that should never have to be performed in front of a crowd of hooting urchins.”

What of rain? I’m reminded of my Mini Moke adventure, when a sweet southern woman smiled and said, “The Good Lord looks after babies and fools.”

Yep, a Lotus Seven America continues to be my kinda sports car. ds