I’VE DISARMED THE auto-correct on both sides of my PC/Apple machine. I’ve had enough of fighting with its opinions on what I really mean. More often than not, it’s wrong; and I’m happy to live with some red dots warning me that something isn’t part of its bizarre vocabulary.

I offer examples of auto-correct transgressions from sources as varied as the American Association for the Advancement of Science, the Huffington Post, SimanaitisSays and Wife Dottie. Here are a few favorites. Maybe you have others you’d like to share?

In my SimanaitisSays compositions, especially those in the Sci-Tech category, I learned to double- and triple-check so that auto-correct doesn’t get the last word. In the recent item on Nanoporous Fabrics, at several stages the algorithm was sure I meant nonporous. 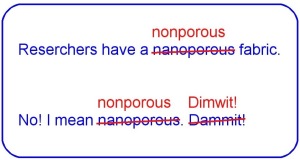 Science, published weekly by the American Association for the Advancement of Science, cited that 20 percent of genetics papers in top scientific journals contained errors traceable to auto-correct in Microsoft Excel, the popular spreadsheet software.

For example, septins are a group of proteins important in cell biology. One of them, septin 2, is encoded in humans by the SEPT2 gene. As you might guess, this plays havoc with auto-correcting to the date September 2. Adding to the confusion, SEPT2 interacts with SEPT6, SEPT7 and SEPT9. But, apparently, not with September 8.

The Internet is replete with examples of faux auto-corrections. Huffington Post collected some great ones. Here are three:

Describing her travails with a new smart phone’s auto-correct texting, a woman wrote, “I think it’s a mixture of lady technology and my satisfied fingers.” “LAGGY, not lady; and sausage, not satisfied.”

Another texted, “I cleaned your meth and crack whores out of my car, since you hadn’t done it.” “I mean ‘mess of crackers!!!’ ”

6 comments on “FIE ON AUTO-CORRECT!”

This entry was posted on September 21, 2016 by simanaitissays in I Usta be an Editor Y'Know and tagged American Association for the Advancement of Science, auto-correct humor, Huffington Post.