PARADOXICALLY, ON LAGUNA DIABLO I had an adventure that was truly blessed. Laguna Diablo is a vast dry lake in Baja California and, in the early 1980s, the R&T crew had driven five mini pickup trucks down there. My favorite of the bunch was a Dodge Ram 4WD, built by Mitsubishi. 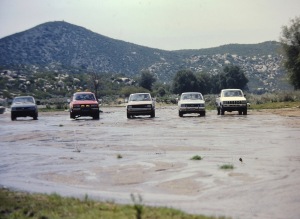 A first look at Laguna Diablo showed signs of its actually being a lake, of sorts.

A portion of Laguna Diablo exhibited remnants of recent rain, a rarity in those parts. Further south, the surface turned increasingly firm and then transformed into relatively deep sand. It felt like plowing through six-inch soft snow. 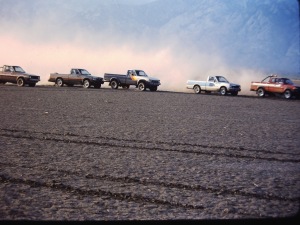 It was from there that I set out in the Ram to reconnoiter a different surface amenable for high speed photography. I found it about 20 minutes, i.e., 10-15 miles, further south. There, the surface was far from Bonneville smooth, but it was perfect for our photography. My plan was to return to our group and lead them back, but before this, I assayed what I intended to be a giant 50-mph skidpad.

Part way around, stability of the Ram was upset by a misjudged rut. Yes, the word “upset” is most appropriate. In Olympic diving parlance, the Ram and I performed a one-and-a-quarter gainer, only laterally.

I made my belted torso real small as the horizon tumbled. Once it stopped, I thought parting company with the truck was a good idea. I exited quick fast through where the rear window had been and scampered shamefully away.

What a blessing; there was no fire, just a gentle hissing of radiator coolant leaking into what was left of a battered engine compartment. 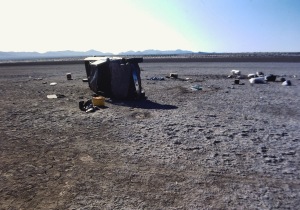 Camping gear was strewn throughout the arc of travel and I retrieved a battered ice chest to sit on. After a few minutes, I warily approached the Ram to retrieve my pack of cigarettes.

Yes, I confess, smoking was among the dangerous things I did in my youth.

This was long before cell phones and I rather doubt the middle of Laguna Diablo would have been known for its reception. So I just sat. Sooner or later, I thought, the rest of our crew would wonder where I had gone.

Blessed as I was, my only injury was a small fragment of glass in my thumb, later removed by a pair of tweezers thoughtfully brought on the trip by future-Wife Dottie.

Indeed, Art Director Bill Motta was the first to arrive. He recalls that from a distance he was puzzled about why, in the middle of nowhere, there was a shack with some guy sitting there having a smoke. 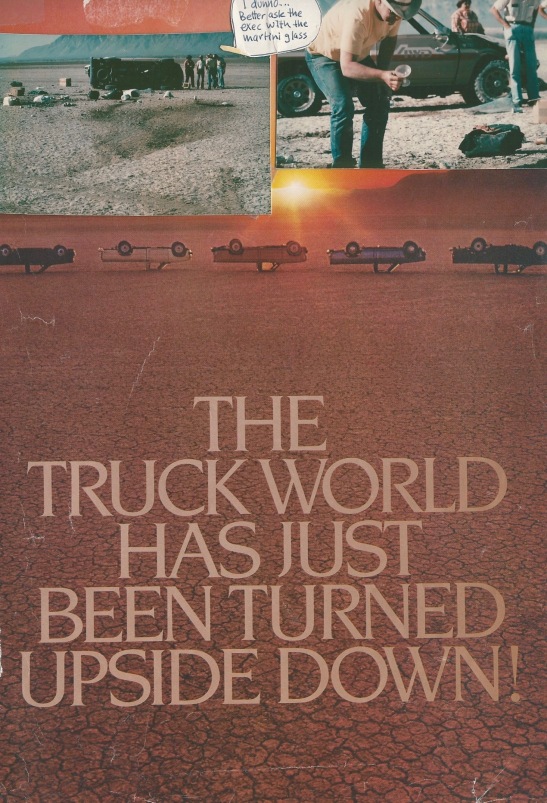 R&T colleagues came to my rescue. Later, they found a familiar-looking ad photographed on Laguna Diablo. (Note the mountain ridge in the background.) Art imitates life.

The magazine, or CBS in those days, or its insurance company bought the shack from Dodge. It ended up with our Baja host. He, in turn, transformed it into something of a beach buggy. 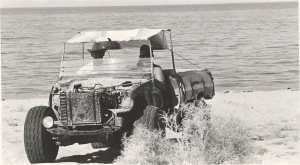 The next day, we crossed into the U.S., sans the Ram, at Mexicali/Calexico and had lunch in El Centro (Dottie’s hometown). We each ordered iced tea. Each of us was delighted to receive a tall glass full of ice and a liter wine carafe of iced tea.

Dottie reported that the Ladies had a thoughtful instruction incised on a partition: “Don’t be apathetic! Vote!!”

Yes, good to be back in El Centro. ds

This entry was posted on August 19, 2016 by simanaitissays in I Usta be an Editor Y'Know and tagged R&T Baja adventure.