IT’S O-DARK-THIRTY, pitch-black along a bridle path in wintery 1991 Karlstad, Sweden. People are savoring sips of akvavit from flasks and waiting patiently behind tape loosely strung between the trees.

A car hurtles by, a couple feet away, pointed every which way but down the bridle path. Then there’s a quiet minute to discuss the driver’s wonderful car control and maybe sample another swig of Løiten Linje.

I was there as a guest of Björn Envall, chief designer at Saab Automobile AB. I had already had several Swedish adventures with Björn, and there were more to come. 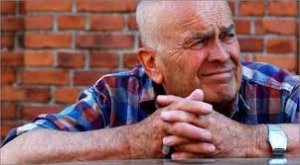 Björn Envall, Swedish-born 1942, retired. He was an apprentice of Sixten Sason, Saab’s first designer, and followed him into the assignment, 1969 – 1992. Image from america.pink.

In Saab’s history as an independent automaker, it had only two chief designers, Sixten Sason, whose Ursaab set the style for the innovative Saab 92, the company’s first production car, and his apprentice/successor Björn Envall. 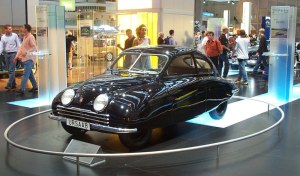 The Ursaab’s innovations reflected the company heritage as Svenska Aeroplan Aktiebolaget, an aircraft manufacturer originating in 1937. Björn’s designs included the EV-1 concept car. When I visited Saab’s Tröllhattan, Sweden, headquarters in 1991, another of Björn’s cars, the 9000 CS, was being introduced,.

Björn is a rally enthusiast and my visit was orchestrated for us to leave Tröllhattan in time for a 107-mile drive to the northeast, to Karlstad, site of the 1991 Swedish International Rally. That evening was the night stage in a Karlstad park that included bridle paths along which the rally cars would be timed. 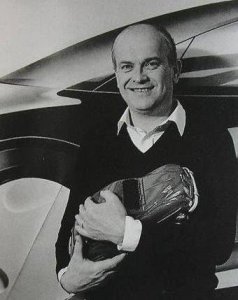 Björn Envall, at the time of our adventures.

Getting there was an adventure in itself. The roads had patches of snow with occasional ice, but Björn drove his Saab 9000 CD with confidence—and plenty of Swedish brio. I recall trusting implicitly in his winter driving skills and, at worst, in Saab’s legendary crashworthiness.

Near Karlstad, a police car blipped its roof-rack lights and Björn dutifully pulled over to the roadside. The conversation that followed reminded me of an Ingmar Bergman movie, filled with implied tension yet oddly understated. Also, I confess that, having next to no Swedish, I always think the language sounds like German being played backwards at low volume. The policeman let Björn go with a warning, and we reached the bridle-path park in time for the evening’s magic. 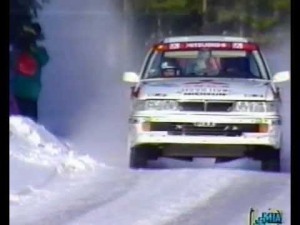 Highlights of the 1991 Swedish International Rally can be seen at this Italian video. Note: I encountered other videos of this event that appeared to be accompanied by scamware viruses. View these others with discretion.

Another stage of the rally took place on a frozen lake, reminding me of similar activities I enjoyed in college days during New England winters. Here, spectators trudged through shin-deep snow to the best vantage points. As documented proof of my presence, I have a book showing a rally car on a snowy lake—and in the background, at a respectful distance, I’m visible standing shin-deep.

The book may be somewhere in the garage, but I failed to unearth it. However, I did find my 1991 Swedish International Rally cap. 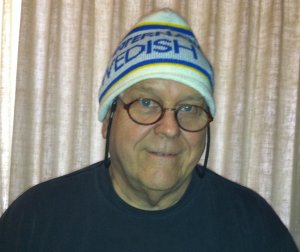 Your author. Photo by Dorothy Clendenin.

Last, in 1991 after arriving home to sunny California, I experienced yet another bit of Swedish hospitality: Björn sent me a rendering of the new Saab 9000 CS. 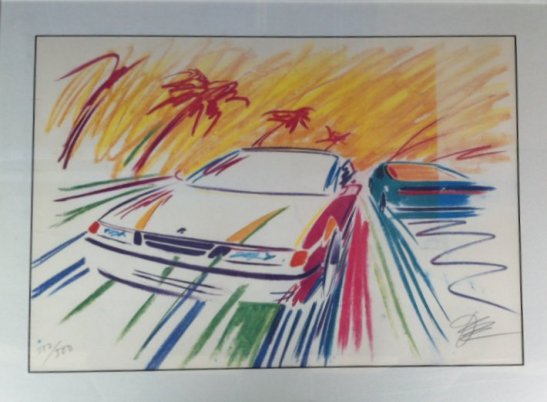 Its background looks rather more California than Karlstad. And, in truth, the akvavit wouldn’t taste as good. ds