THERE WAS A time when Watkins Glen was known primarily for its salt mines. It was the home of Watkins Salt Company, a major player in salt production in the early 1900s. It was many years before motorsports became an attraction of this upstate New York town on the southern tip of Lake Seneca.

The first professional automobile race at the Glen was a NASCAR Grand National Stock Car event in 1957. The inaugural U.S. Grand Prix, won by Innes Ireland in a Lotus, was there in 1961. Today, Watkins Glen International hosts everything from car club events to those of the International Motor Sports Association, Sports Car Club of America and Sportscar Vintage Racing Association to the NASCAR Sprint Cup’s Cheez-It 355 at the Glen. There’s also the Finger Lakes Beer Festival and Finger Lakes Wine Fest.

But before all of these, there was the first Watkins Glen Grand Prix, October 2, 1948. 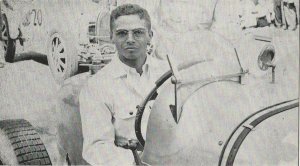 Cameron Argetsinger was from Youngstown, Ohio, though his family had a summer home in Schuyler County, the county seat of which is Watkins Glen. One of the early members of the SCCA, Argetsinger dreamt of—and carried off!—European-style road racing through the environs of Watkins Glen.

Even in those less litigious days, the organizers’ challenges were formidable. For instance, part of the circuit passed over a trunk line of the New York Central Railroad. Officials of the railroad agreed to run their trains on a revised schedule during intervals between race-day activities. Other portions of the circuit came under village, county, state park or state jurisdictions, and all of these agencies cooperated. 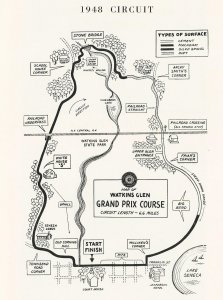 The 6.6-mile circuit had its start/finish appropriately located in front of the county courthouse on Watkins Glen’s Franklin Street. After a right/left chicane of sorts, an uphill on Old Corning Road took the cars out of town and into the woods. In homage to the Le Mans circuit, an S bend along Townsend Road was named White House (Maison Blanche). A not overly wide underpass defined the circuit’s first intersection with the New York Central tracks. 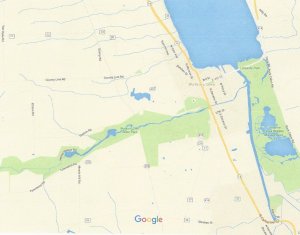 A steep downhill led to a stone bridge crossing Glen Creek onto Whites Hollow Road. A right at Archy Smith’s Corner led onto Station Road (and the Railroad Straight), with its crossing the New York Central tracks before a long left downhill sweeper, the Big Bend, leading back into town. A left/right jog brought the cars back onto Franklin Street at the Jefferson Hotel.

The circuit was more than challenging. It was exhilarating and, in retrospect, downright dangerous. Only driver skill, good fortune and luck precluded deadly accidents for the first two years’ running. Sam Collier, one of the SCCA stalwarts, was killed at the 1950 Watkins Glen Grand Prix in a crash of his Ferrari 166.

An accident in the inaugural 1948 event caused no injury to entrant William F. Milliken, Jr., other than to his reputation. Bill, whose other exploits are equally legendary, managed to flip his Type 35A Bugatti on the left entering town after the Big Bend. Thereafter, it became known as Milliken’s Corner. 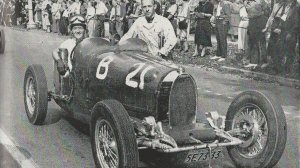 Bill Milliken and his Type 35A Bugatti.

Prior to the racing on October 2, 1948, there was a morning Concours d’Elegance, with three classes: Veteran, Vintage and Modern. The Qualifying Event, also known as the Junior Grand Prix, was a four-lap race beginning at noon. The Grand Prix itself was an eight-lap race given the green at 1:30 p.m. Each race had a standing start.

Wrote Bill Milliken, “From a driver’s standpoint, nothing can be compared to having been in the midst of that snarling pack as it slid through the “S” turn off Franklin Street and accelerated up the long hill!”

Other participants of the 1948 Watkins Glen Road Races may be familiar names to motorsports old timers: Briggs Cunningham entered two cars, an MG and his Bu-Merc, a 1939 Buick Century clothed in bodywork of an SSK Mercedes-Benz. 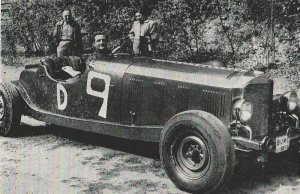 Frank Griswold won both events in his potent and beautiful Alfa Romeo 8C 2900B Berlinetta Touring. He averaged 64.5 and 63.7 mph in the Qualifying Event and Grand Prix, respectively.

Frank Griswold and his Watkins Glen-winning Alfa Romeo 8C 2900B.

Another participant was John Fitch, who advanced from his MG entry at the Glen in 1948 to an illustrious career in international motor racing with Cunningham and Mercedes-Benz.

Charles S. Addams, cartoonist and creator of the darkly humorous Addams Family, was another. Addams raced his supercharged Mercedes-Benz S. 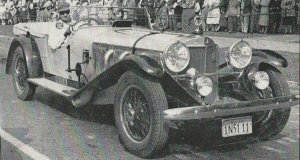 Charles S. Addams and his Mercedes-Benz S. Addams is renowned for introducing a Sherlock Holmes deerstalker to the Glen.

There are stories a’plenty here, all starting with a 1948 race around the Glen. ds