EARLIEST MAN arose on the African continent, and with evolving culture came mathematics. There’s a standard book on this subject, now in its third edition, Africa Counts by Claudia Zaslavsky. I’ve had my copy since its first publication in 1973 and offer here several tidbits.

Claudia Zaslavsky, 1917 – 2006, was a mathematical educator who specialized in ethnomathematics, the study of math within its ethnic and cultural milieus. Africa Counts, Zaslavsky’s pioneering book, pays particular attention to Southwest Nigeria and East Africa in addition to the more familiar Egyptian culture of the Nile Valley. The book discusses the basics of numeration through words, gestures and counting, numbers in daily life and also mathematical recreations 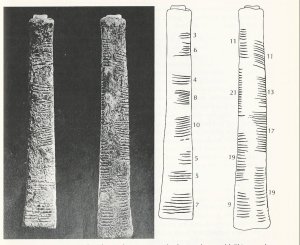 Two views of the Ishango bone. These and other images from Africa Counts.

Tallying of objects, the association of one bunch of things with another, is common to all cultures. It’s basic counting. The Ishango bone is archeological evidence that Late Stone Age man already employed this process. When Zaslavsky wrote her book, the Ishango bone was estimated as coming from 8000 B.C., its markings perhaps having lunar significance. More recent studies suggest it may be 20,000 years old.

As with other cultures, the human body provided convenient means of numerical association. (This is why the most familiar of number systems is base-10.) Even today, elaborate finger gestures are part of African enumeration and incorporated in lots of mathematical recreation. 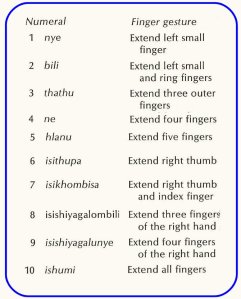 On the other hand (no pun intended), many religions and cultures abjure literal representations of human form (thus, the flat iconography of Russian Orthodox art, the Islamic prohibition of Mohammad’s image). Zaslavsky notes that several West African cultures had religious taboos against direct numeration of any living creature, thus employing tally associations.

With cultures around the world, weights and measures evolved with human activities. The English Magna Carta, for instance, did more than acknowledge limits of royal power. It and earlier documents set standards throughout the kingdom for measures such as the inch, foot and yard.

One yard measuring from the king’s nose to his outstretched arm is merely a folktale. However, in West African village cultures, it was not unknown to choose the guy with the longest arms when measuring cloth.

The origins of numerical concepts are found in African languages. Five digits on one hand and twenty fingers and toes gave rise to quinquavigesimal notation (rest easy, the exam is open book). That is, many people use groupings of fives and twenties. Others like units of four as well. Of course, this isn’t restricted to African cultures. The French word for eighty is quatre-vingts, literally four twenties. And how many blackbirds were baked in the Sing a Song of Sixpence pie? Four and twenty.

In the Banda language of Central Africa, the word for twenty means literally “take one person.” Others say “man complete” for the same number. And, with just a bit of linguistic agility, a Malinke expression for forty is dibi, literally “a mattress” reflecting the logic that husband and wife share one.

The Malinke had an older word, literally “five men complete,” for 100. Given its use in counting cowrie shell currency, they adopted an earlier word for “a lot” to mean specifically 100. 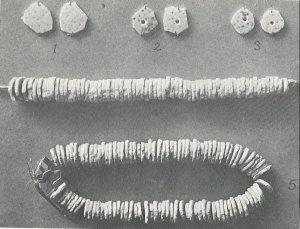 Cowrie shells or other objects strung on cord made for handy currency. The currency also provided a ready-made and straightforward means of supporting a kingdom. With the Dahomey people, for instance, a standard number of 40 shells per string was used by all—except the king. He bought things with royal strings containing arbitrarily 34 or 37 cowries, thus getting up to a 15 percent discount on his purchases. 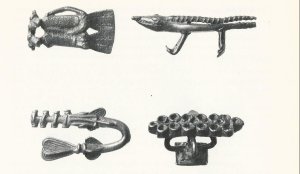 In the Asante Kingdom, balance scales had brass weights for trading gold and other goods. However, the royal balance weights weighed a tad more than those used by commoners. Thus, the king deftly taxed such transactions to fund charity, public works and his own well-being.