SIMANAITIS SAYS, SON OF THE SEQUEL

THIS BEGINS the fourth year of SimanaitisSays.com. Many thanks to those who have made its composition so very satisfying. Today I offer a selection of past items and accompanying videos that were satisfying to me (and happened not to be automotive in character).

True, the first one, appearing May 7, 2015, is titled “Ferraris I Have Known,” however all three of these Ferraris qualify as non-automobiles. First, it was Signor Ferrari who ran the Blue Parrot, in competition with Rick Blaine’s Café Américan in the 1942 classic film Casablanca. Second, Ermanno Wolf-Ferrari was a composer of early 20th-century opera, his father German, his mother Italian.

And third, my favorite of the trio is Benedetto Ferrari, 17th century Italian composer, whose Amanti, io vi so dire (Lovers, I know you say) is sung so charmingly by Canadian soprano Peggy Bélanger with theorbist Michel Anger. Sit back and enjoy.

Another musical item, originally here on February 12, 2015, and most timely these days, is the 1-Minute Opera Vlucht MH-370. It was on the Dutch TV program De Wereld Draait Door and performed by singers Nora Fischer and Martijn Sanders accompanied by the Dudok Quartet.

The performance of this 1-Minute Opera is all the more haunting in light of recent recovery of a wing panel from the missing Malaysian flight washed ashore on Réunion Island in the Indian Ocean.

I especially enjoyed preparing the July 16, 2014, “Son of Director’s Cut” and its related items on the 1876 Otto Silent Engine. In particular, computer-modeling the Otto using GMax software was great hours-gobbling fun. 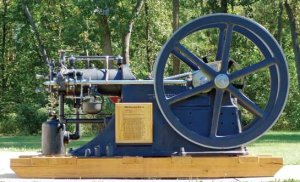 I recommend the video of Wayne Grenning operating his restored 10 HP Schleicher Schumm slide-valve engine, a kin of the Otto. Note the husband/wife interaction around the 5-minute mark.

The August 9, 2013 celebration of Peter Ustinov touched on the multiplicity of talents possessed by this English polymath. Especially fascinating is his fantasy conversation with Russian novelist Feodor Dostoevsky.

Last, what with actress Maureen O’Hara as part of it and my own personal involvement, I had fun researching the Grumman Goose item offered on September 23, 2014.

I took the item’s embedded video of an Antilles Airboat Goose setting down in St. Thomas Harbor back in the 1970s. As I said concerning the website item’s musical score, “Come here! Get down!”

I’d offer hints on future SimanaitisSays topics, but like a dear lady once noted, “How ever am I to know what I say before I say it?” ds

5 comments on “SIMANAITIS SAYS, SON OF THE SEQUEL”