NON-DEPRESSING TALES OF THE GREAT DEPRESSION

ADVERSITY BREEDS its own humor, and the Great Depression is a perfect example of this. I’ve been enjoying The WPA Guide to America, whence came a lot of delightful tales. It’s even possible that some of them are true. Here are two, with some added research of my own.

Salinas, California. Long before the Monterey Historic Car Weekend on the peninsula nearby, Salinas had more than 50,000 acres in lettuce. This was planted, cultivated and harvested in the spring, summer and autumn by more than 2000 workers who “moved with the crops.” In 1936, lettuce workers there struck for higher wages and better working conditions. Noted The WPA Guide, “Salinas burst into the Nation’s headlines as the scene of tear-gas battles between State Highway Patrol officers and strikers.”

Matters escalated with a report of a Communist advance on Salinas, proof of which were red flags taken from the highway and sent for analysis to Sacramento, the state capital. “Airplanes were sent up to reconnoiter,” noted The WPA Guide, “Embattled growers prepared to defend life and property.”

However, “In the meantime, an indignant highway commission requested that the flags placed as markers on roadsides by its workmen be returned….”

Which action signifies a Communist threat? Images from the Federal Highway Administration.

My research confirms the matter. In September, 1936, there was a 15-day period in Salinas when, in retrospect, Timelines.ws cited that fascists and agencies of law and order oversaw a “ruthless” dictatorship under the guise of a “red scare.”

Some scare: Watch out for that road shoulder.

San Francisco, California. A U.S. Mint, one of several in the country, has been in San Francisco since 1854, established to serve the California Gold Rush. Four other facilities are in Philadelphia (the oldest, established 1792 when this city was the U.S. capital), Denver (1863, following a Colorado gold rush), West Point (a Bullion Depository since 1937, officially a Mint in 1988) and Fort Knox (Mint storage since 1936). 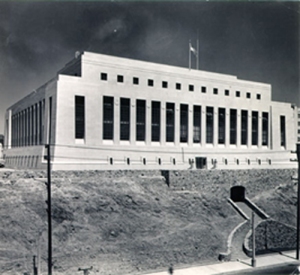 A new San Francisco facility was constructed in 1937 at the cost of $1,500,000 (perhaps $24 million today). Noted The WPA Guide, “Three stories high in the rear and five in front, it has heavy exterior walls of reinforced concrete and granite. Precautions against robbery include electrically controlled doors, a gun tower and tear gas lines. The Mint stands on a 100-foot cliff, with foundations set deep into solid rock, and was considered impregnable….”

Until, that is, January 1939, when The WPA Guide reported “two schoolboys by daylight scaled a wall by means of a drain pipe, slipped through a window opened for ventilation, and threw out a copper plate, ‘just to see if it could be done.’ ”

The kids didn’t get off scot-free. According to the California Digital Newspaper Collection, the Sausalito News, January 12, 1939, published a story headlined “Schools Refuse Mint Breakers.” It’s reported that the two boys, Paul Francis and William Gallagher, “openly laughed in court” when told their respective schools had permanently expelled them.

“The only punishment meted out,” wrote the newspaper, “was a scathing reprimand by Federal Judge A.F. St. Sure. One boy will be sent to the Dominican school near Ukiah and the other to a Santa Clara school.”

Santa Clara and Ukiah are both nice places. But I’ll bet the Dominicans taught the one kid a thing or two. ds

2 comments on “NON-DEPRESSING TALES OF THE GREAT DEPRESSION”