IN REAL life and on my flight simulator, my home field is John Wayne Airport, officially SNA as in Santa Ana, California. (Its KSNA designation by the International Civil Aviation Organization adds the prefix K for airports in the contiguous U.S.)

Locals have been known to call it Duke Field, honoring its John Wayne moniker and a statute of The Duke residing outside its arrival/departure hall.

However, there’s a lot more aviation history in Orange County than simply Duke Field. The county was home to Glenn L. Martin, one of aviation’s pioneers. It hosted the likes of Amelia Earhart and Howard Hughes. Military air bases were crucial Orange County real estate during World War II. Its aviation landmarks have motor sports links as well.

From Jennies to Jets: The Aviation History of Orange County, by Vi Smith, illustrations by Steve Sheflin, Sultana Press, 1974. The book is listed at both www.abebooks.com and www.amazon.com.

Author Vi Smith begins her tale of From Jennies to Jets: The Aviation History of Orange County with a balloonist’s demise in 1900. Its 1974 publication came five years prior to Orange County Airport’s name change to honor John Wayne in the year of his death.

Glenn Martin takes his most enthusiastic supporter, his mother, Arminta “Minta” Martin, for a flight, 1912. Image in From Jennies to Jets.

Glenn L. Martin (1886 – 1955) was “The Flying Fool of Santa Ana,” though teamed with his mother Minta he founded one of the country’s major aircraft concerns.

The original home of the Glenn L. Martin Company was Santa Ana, with subsequent corporate iterations in Los Angeles, Cleveland and Baltimore.

Mrs. Martin exhibits justifiable pride with models of famous aircraft designed and manufactured by her son’s company. Image in From Jennies to Jets.

A post World War II photo shows Minta Martin (1864 – 1953) with Martin aircraft models. In the foreground is his pusher biplane, the first aeroplane to fly in California, August 1, 1909. Directly above the biplane is the JRM Mars, the largest Allied flying boat to enter production during World War II. The flying boat in the right foreground is the M-130 Clipper, its China Clipper, Philippine Clipper and Hawaii Clipper providing trans-Pacific luxury for Pan American Airways during aviation’s Golden Age in the late 1930s.

Another tale in Smith’s book is Howard Hughes setting a world record in his all-metal low-wing 1100-hp H-1 monoplane. 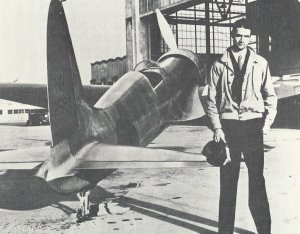 Rakish 30-year-old millionaire Howard Hughes poses with his record-breaking H-1 aircraft, 1935. Image in From Jennie to Jets. Hughes was characterized by author Vi Smith (in 1974) as “Now a mysterious recluse.”

With Amelia Earhart on hand as a spectator, Howard Hughes made seven circuits of a 3-kilometer triangular course above Orange County at an official average of 352.46 mph. Then he forgot to switch tanks, ran out of fuel and ditched without injury into a beet field—within a mile of where I write this.

Also not far from my Orange County home is Mile Square Park, named for the Mile Square Naval Outer Landing Field. A giant equilateral triangle of concrete, each leg approximately 2200 ft. in length, challenged WWII pilots in their carrier deck qualification training. It was used later during the Korean War for helicopter crews.

Those flying into SNA’s 20R (see http://wp.me/p2ETap-1Me for its original designation) can view other bits of Orange County aviation history—and large bits indeed: the two giant hangars of what was originally the Navy Lighter-Than-Air Base; more recently, the Santa Ana Marine Corps Air Station (Helicopter).

The venue around them has changed, but the vast blimp hangars are still there on the left of an SNA 20R approach. Image in From Jennies to Jets.

The blimp hangars also made the pages of early Road and Track magazines (the “&” didn’t appear until several years later). 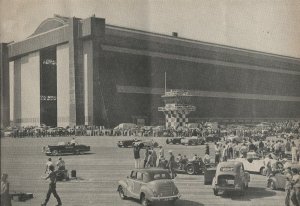 The Santa Ana Road Races, summer of 1950. Image above from Road and Track, September 1950. Map of the circuit below from http://goo.gl/Ytbf0q.

There’s a lot of history, aviation and otherwise, in Orange County, California. ds