I FIND it difficult to image two more contrasting automobiles, but both appeared at the 2013 Tokyo Motor Show. The Nissan BladeGlider is so radical, it makes your teeth ache. The Toyota JPN Taxi Concept makes you forget you have them. However, both cars are fascinating in what they represent.

The Deltawing proved its mettle at the 2012 Le Mans as the organizers’ “garage 56” entry, specifically set aside for experimental vehicles. It qualified 29th, but retired after a collision, for which the other driver offered apology. 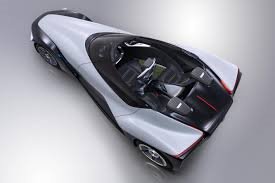 Whereas the Deltawing racer was a two-seater, of sorts, the Nissan BladeGlider is a three-seater, with central driving position and a second row for a pair of passengers. See www.wp.me/p2ETap-1Lr for McLaren’s take on such accommodations.

The BladeGlider’s doors swing out and up.

As with the McLaren, upward-swinging doors appear to grant surprisingly good access to all three seats—though, given the choice, I’d opt for the seat in front.

The BladeGlider has a front track of 39.4 in. A more conventional rear track is commensurate with the car’s 30/70 weight distribution. The idea is to concentrate all the roll stability at the rear; the front tires are required to do little more than steer the car.

Unlike the conventional powerplant of the Deltawing, Nissan’s BladeGlider is a battery electric, its two rear wheels containing separate motors. Note this offers all sorts of lateral control possibilities by selectively feeding power to either side. Also, the car’s odd layout and weight distribution may mitigate the usual in-wheel-motor disadvantage of excessive unsprung weight.

Along with the name BladeGlider, all this seems mighty/flighty conceptual—but Nissan claims the BladeGlider is “an exploratory prototype of an upcoming production vehicle from the world’s leading EV manufacturer.” Check out http://goo.gl/6EzYha for Nissan’s spin on this.

Traditionally—since the mid-1990s, for goodness sake—Toyko’s taxi fleets have used the Toyota Crown Comfort (what a great name!) and the Nissan Crew (discontinued in 2009). Toyota sees this concept as “created with Japanese hospitality in mind,” though it has none of those little doilies that fancy up previous examples of the genre.

A wide-angle lens does wonders. One view from the paying seats of Toyota’s JPN Taxi Concept.

Electrically actuated sliding rear doors appear to offer better access than I recall in the traditional Crown/Crew. A deeply cut greenhouse and glass sunroof would show off Shinjuku glitter at any hour. 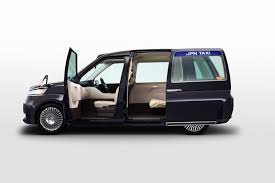 The passengers also get a large monitor showing the route to destination and fare. The driver has multiple screens for GPS-based guidance. 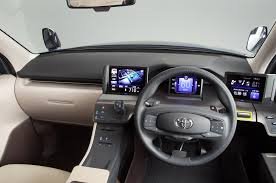 Plenty of screens for the driver as well.

Not much technical detail is disclosed about the JPN Taxi Concept other than its LPG hybrid system. Cabs in Japan already use liquefied petroleum gas (the same reasonably clean fuel that allowed Morgans in the U.S. market back in the 1980s). And hybridizing the system makes complete sense when you consider the time a Tokyo hack spends patiently feather-dusting the dashboard while waiting for the light to change. ds