PORTRAYERS OF Sherlock Holmes have had varied stage presentations. Here are several of my favorites, the CDs of which are available at Amazon.com. 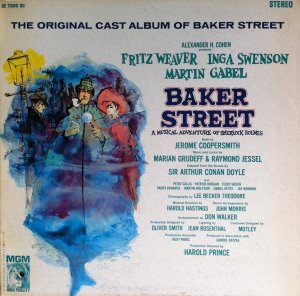 Replete with special effects, within the theater as well as on its outside marquee, the 1965 musical Baker Street was fabulously expensive even by Broadway standards. It ran for more than a year, but never did break even. Wrote Variety, “Splendid is the word for Baker Street, a big rousing musical success in the My Fair Lady, Around the World in 80 Days class.”

In 1993, Sherlock Holmes, the Musical introduced a highly non-Canonical but endearing character—Bella, the beautiful and brilliant daughter of Professor Moriarty. Early on, in giving homage to the arch criminal, Holmes sings “Without Him, There Can Be No Me.” Later, there’s a lovely reprise sung by Bella. Though it was not as successful as Baker Street, I prefer this musical.

The Great Detective ballet, 1953; its CD available at Amazon.com. Image from The Pictorial Collection of Sherlock Holmes, by Michael Pointer, Brompton Books, 1991. Both Amazon.com and ABEBooks.com list the book.

Stephen Sondheim also contributed to the fun in 1976. He provided a song for the movie version of Nicholas Meyer’s Holmes pastiche, The Seven Percent Solution. “I Never Do Anything Twice,” sung by the madam of an upscale brothel, is scandalously non-Canonical, but good fun. “I think about the Baron/Who came at my command,/And proffered me a riding crop and chains./The evening that we shared/Was meticulously planned:/He took the most extraordinary pains.” 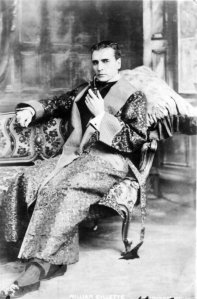 William Gillette portrayed Holmes in Sherlock Holmes, the Strange Case of Miss Faulkner some 1300 times before American and British audiences beginning in 1899.

To an early generation of theater goers, American actor William Gillette (1853-1937) all but defined Sherlock Holmes—rightly or wrongly. It was Gillette who first portrayed Holmes smoking a meerschaum pipe, the kind with an elaborately curved stem and oversize bowl.

The real Holmes never smoked a meerschaum. As clearly shown in the illustrations of Sidney Paget (who knew Holmes almost as well as Watson did), his pipes were invariably straight stemmed.

By the way, some scholars say Holmes’ deerstalker hat is equally non-Canonical. However, I beg to differ, again citing Paget’s illustrations from life. Of course, Holmes wore his primarily when out and about; such country wear just wasn’t on in town.

A familiar name appears in the London playbill of Gillette’s stage production.

Last, an interesting near-meeting: For three years, 1903-1906, a teenage Charles Chaplin portrayed Billy (a non-Canonical name given the pageboy) in William Gillette’s stage production. It is doubtful the real Little Tramp ever met the real Sherlock Holmes. ds

This entry was posted on December 10, 2012 by simanaitissays in The Game is Afoot and tagged ballet, Sherlock Holmes, theater, William Gillette.