ODDITIES OF aviation usually exist in ones and twos. Yet the Transavia PL-12 Airtruk, one of the oddest, had a production run of 118 examples over a 27-year period, 1966 to 1993. It even played a role in a cult movie.

This Microsoft Flight Simulator model of the Airtruk, built by Mike Stone, displays the PL-12 in all its oddity.

Genesis of the PL-12 traces back to an even more ungainly—no, let’s make that ugly—aircraft built in New Zealand. The Bennett Airtruck was cobbled together from pieces of the North American Harvard (our USAF AT-6 Texan) into a crop duster. Two were built; both suffered crashes. 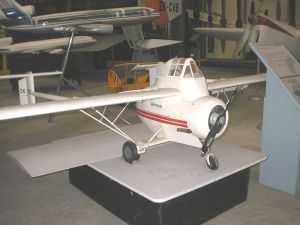 Elements of the North American Harvard from which it was derived can be seen in the Bennett Airtruck, a precursor of the Transavia craft of (almost) the same name.

The Australian Transavia Corp. modified the design considerably and had it certified in February 1966. It became the “Airtruk” because the name “Airtruck” had been registered by the earlier New Zealand builders.

I photographed this example of the PL-12 in the Museum of Transport and Technology, Auckland, New Zealand.

The Airtruk’s abbreviated fuselage could be converted to accommodate one passenger behind the pilot and four more in a lower deck. Other variants served as air ambulances, survey platforms and utility haulers in addition to the original crop-dusters.

The Airtruk had other fish to fry, namely its utility-aircraft maximum takeoff weight of 4244 lb. A Texan took off at no more than 2600 lb.

Yet there is a significant commonality in the aviation careers of Airtruks and Texans. The latter have been gussied up to play Mitsubishi Zeros and the like in motion pictures. And the Airtruk is a film star as well.

The Australian-made Mad Max Beyond Thunderdome is a post-apocalyptic flick starring Mel Gibson and Tina Turner. (Now that’s a film duo.) MMBT, appearing in 1985, is the third of four in the Mad Max series. Some say it’s the best; others, the worst. Having not seen it, I’ll venture no opinion, other than celebrating the Airtruk’s role.

The plot of MMBT is sufficiently complex that a “plot spoiler” warning is unnecessary here. Briefly, at the start Max Rockatansky (Mel) and his camel-drawn wagon are highjacked by bad guy Jedediah the Pilot in his (ta da!) PL-12.

This Airtruk is done up in MMBT rusty condition by flight simmer Andy Nott. I suspect that’s Jedediah the Pilot at the controls. And could it be…?

By the end of the movie, now good guy Jedediah the Pilot and his PL-12 rescue the kids (“What kids?” you ask; don’t ask) as Max stays behind to endure the wrath, or whatever, of Aunty Entity (Tina’s role).

All in good fun, and an interesting backstory to aviation history. ds

This entry was posted on December 11, 2012 by simanaitissays in Vintage Aero and tagged Bennett Airtruck, Mad Max Beyond Thunderdome, Transavia PL-12 Airtruk.