I ENJOYED READING Michael Hofmann’s “Not in Spanish,” in London Review of Books, May 21, 2020. This article is a review of The Bilingual Brain, by Albert Costa, Catalan cognitive scientist, neuropsychologist, and linguist.

Reflecting Costa’s Catalonian birth, upraising, and life, Hofmann cites him saying with a shrug, “Most of the people I know are bilingual.”

The Bilingual Brain: And What It Tells Us about the Science of Language,

Hofmann writes, “Costa speaks to the reader in a way that he and we are equally helpless to resist—unmannered, natural, charismatic. He is obviously in love with his subject, taking it everywhere with him, seeing it wherever he goes.”

Costa’s post-doctoral studies, with funding by the Catalan government, were at MIT, and at Harvard’s Cognitive Neuropsychology Laboratory with a Fulbright scholarship. Research positions in Trieste and Barcelona followed. From 2008 until his death in 2018, he was a professor at the Catalan Institute for Research and Advanced Studies—Universitat Pompeu Fabra. 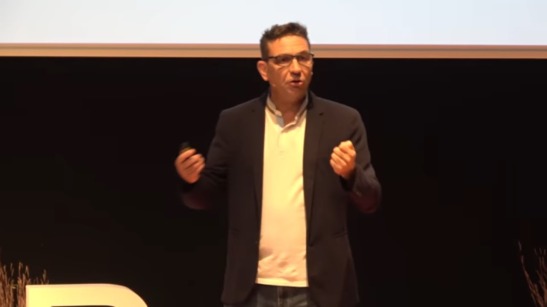 Costa is remembered by friends as “a hybrid of English Lord and truck driver…. always polite and attentive but with a rebel and irreverent point.”

Categories of Bilingualism. Hofmann notes that Costa “doesn’t really distinguish between the individually-formed bilingual, handmade by circumstance, and those who belong to groups historically or geopolitically tending to bilingualism—Catalans, for example, like Costa himself, or Belgians.”

Costa, Hofmann says, “is simply exclaiming at the wonders of human speech (‘We are all talking heads,’ he begins).”

Bilingual Infants. Hofmann cites Costa: “Newborns ‘show a preference for words spoken by the mother compared to those uttered by a stranger.’ Four-month-old bilingual babies can distinguish (already!) their two languages; on hearing them, they take longer to respond than monolingual babies, possibly, Costa conjectures, because ‘evaluating which of the two languages is the one being heard… would take additional time.’ ”

Brain-injured Bilinguals. What about bilingual stroke victims? “It’s an uncertain, contested area,” Hofmann says, “with one scientist defining five distinct types of recovery, though it seems to be accepted that ‘there are quite a few people who after brain damage have more problems processing nouns than verbs’ ”

Language Selection. Hofmann’s choice of LRB title, “Not in Spanish,” comes from a Costa family tale: “When Costa, rebuking his son, slipped from Catalan into Spanish, the language he was most fluent in, his frightened little boy said to him, ‘No, Dad, not in Spanish!’ ”

I am reminded of Russian-born American musicologist/conductor/“failed wunderkind” Nick Slonimsky, whose daughter Electra learned Latin before English. She would occasionally ask her father, “No, Daddy, what would my friends call that?” ds

This entry was posted on July 9, 2020 by simanaitissays in I Usta be an Editor Y'Know and tagged "Not in Spanish" Michael Hofmann "London Review of Books", "The Bilingual Brain" Albert Costa, Albert Costa (1970–2018) Catalan cognitive scientist neuropsychologist linguist, bilingual infants recognized difference at four months, brain-injured bilinguals have more problems with nouns than verbs, infants show preference to mother's voice than to strangers'.