YESTERDAY’S TOPIC of extended takes in cinematography focused on Orson Welles’ film noir Touch of Evil. Today, in Part 2, we confirm French director Jean-Luc Godard’s truism that cinematographic truth is destroyed by multiple takes, cuts, and editing. His 1967 Weekend is a black comedy featuring a traffic tieup filmed by Godard as one continuous 7 minute 40 second take. 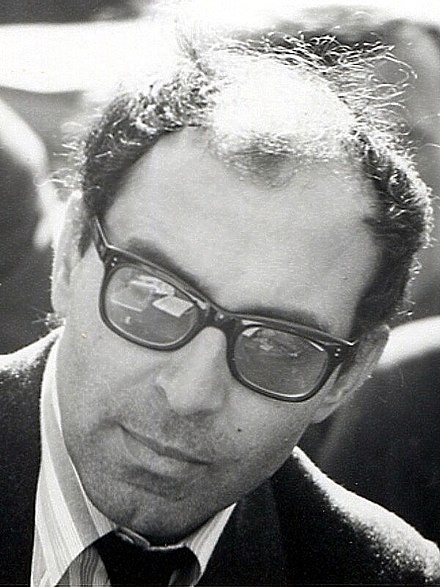 Deadly Plotting. Weekend explores just about every dimension of murder, including metaphorical self-destruction. Roland and wife Corinne each has a secret lover and a secret plan of spouse-disposal. They travel in their Facel Vega to the country home of Corinne’s parents, where they intend to secure her mother’s inheritance from her dying father, through murder if necessary. 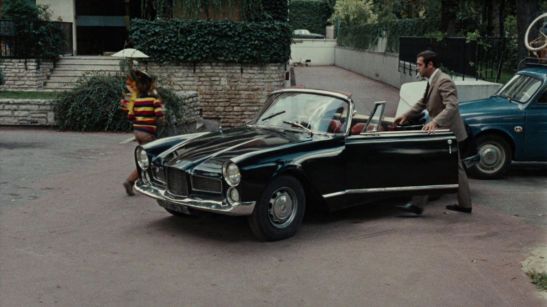 Roland and the Facel Vega. Image from Weekend.

Weekend takes horrific turns, in what Wikipedia likens to “Alice in Wonderland, the James Bond series, and the works of Marquis de Sade.” Not to give away its chaos, there are multiple murders, fatal car accidents, hippie revolutionaries, and cannibalism.

Godard’s Extended Take. The drive to Corinne’s parents has the couple on a country two-lane road, typically French in being tree-lined and straight as an arrow. There, in the midst of the couple’s murderous plotting, they come upon an immense tieup.

Godard tracks the banality of their getting through the tieup with a camera on a dolly traveling parallel to the road. His crew laid 300 meters (almost 1000 ft.) of track for the continuous shot. 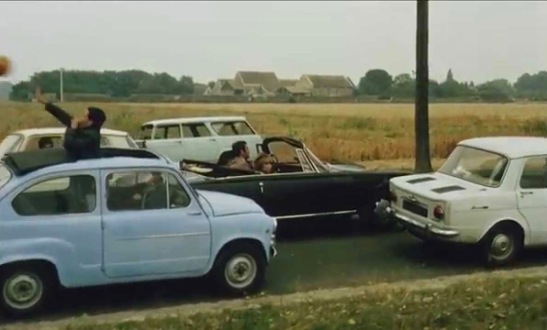 The Weekend extended cinematography from vimeo.com.

The Facel Vega forces opposing cars off the road, barges past other cars in its lane, and occasionally gets abruptly cut off itself. In its own perverse way, the snail-pace chaos is every bit as captivating as C’était un Rendez-Vous, the cinéma-vérité cult flick of a Ferrari storming through early-morning Paris. Or, better yet, the 1904 Méliès classic, Le Raid Paris—Monte Carlo en Deux Heures.

The cacophony of auto horns in the sound track of Weekend reminds me of George Gershwin’s use of four Parisian taxi horns in the performances of his American in Paris, 1929.

There’s a full array of mid-1960s’ European cars in Weekend. My favorite one in the take is the Citroën DS. What’s yours? ds

This entry was posted on January 3, 2020 by simanaitissays in I Usta be an Editor Y'Know and tagged "Weekend" Jean-Luc Godard 1967, French country road tieup, Jean-Luc Godard French New Wave cinema.