SINGING OPERA GENERATES quite a thirst. Here, in Parts 1 and 2, today and tomorrow, are tidbits on operatic taverns, inns, and similar hostelries, especially those with more than a passing relationship to the plot. Some of the locales are well known; others I researched in Sir Denis Forman’s wonderful book A Night at the Opera. Indeed, often his droll descriptions of the operas are more entertaining than the operas themselves. 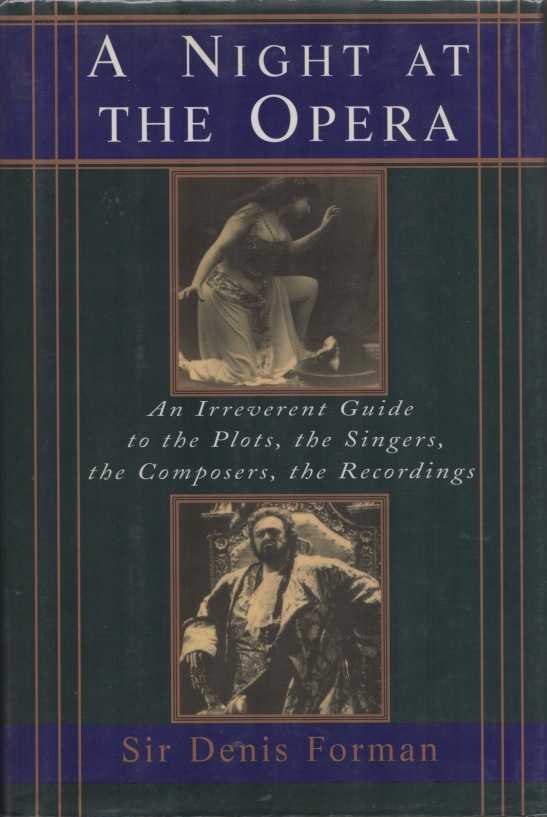 A Night at the Opera: An Irreverent Guide to the Plots, the Singers, the Composers, the Recordings,

Café Hottot in Umberto Giordano’s Andrea Chénier, 1896. This opera, Forman writes, is “The one where the butler leads a riotous mob into the Countess’s drawing room, where there’s a march past [the Café Hottot] of named French Revolutionaries, and a court scene leading to tumbrils for two.”

Act II of Andrea Chénier takes place in Café Hottot. In fact, the café, also known as the Café des Tuileries, was a conspirators’ hangout during the actual French Revolution. In The Diary of a Citizen of Paris During the Terror, Volume 1, Edmund Biré wrote that the Café Hottot “has a back-door communicating directly with the Riding-School, and its habitués are in constant receipt of reports…. Here they arrange their batteries, give the watchword and transmit the signal for applause or dissent, ordering at will the men and women who fill the galleries and corridors or crowds around the entrances.”

Forman sums up the opera, “Chénier does not purge the soul with pity and terror nor does it fill the mind with wonder and admiration, but it is always enjoyable, sometimes touching and never for a moment dull. More than you could say for a number of much more famous titles.”

Café Momus in Giacomo Puccini’s La Bohème, 1896. Poet Rudolfo, painter Marcello, philosopher Colline, and musician Schaunard, together with lady friends Musetta and Mimi, have fun stiffing sugar daddy Alcindoro with the bill at this café, popular with Paris bohemians because its coffee was cheap.

The actual Café Momus is at the right in this watercolor by Henri Lévis, 1849. The place went bankrupt in 1856.

There’s also reference to an unnamed tavern in Bohème Act III, near a customs post at the city gate. Marcello is painting a mural in the tavern. Musetta is giving singing lessons there. Mimi stands outside, coughing. Things will not end well.

Forman: “Bohème is one of the top ten operas for all but pedants and musical snobs.”

An Inn Near the Lithuanian Border in Modest Mussorgsky’s Boris Godunov, 1874. Forman writes, “The one where the Tsar gained the throne by killing the true heir when he was a baby, the memory of which drives him to madness and death.” Not exactly my favorite opera (or Russian history), but its Act I Scene 2 locale caught my eye. And Forman’s description of the action is a hoot.

Forman: “The lady who keeps the pub sings an irrelevant folk song about a duck. Two tramps Missail and Varlaam dressed as friars come round looking for money followed by Grigory [a novice monk] in disguise. I want to get over the border to Lithuania says Grigory. Varlaam sings an irrelevant song about the battle of Kazan…. I want to get to Lithuania says Grigory again who is in danger of becoming a Lithuanian bore.”

Boris Godunov, Act I Scene 2 , a tavern near the Lithuanian border. Video from the Commonwealth Lyric Theatre, Boston, May 2016. The singing is luscious, even if the plot has its ups and downers.

It gets better, with two more irrelevant songs, one about a flea, the other, an owl. Then worse, what with the Tsar’s madness and death. And, Forman notes, an idiot who “repeats his dreary message about the blood and tears that lie ahead for Russia.”

Honestly, were it not the disguised novice monk pining for Lithuania and the luscious singing, I’d have left this one out.

Tomorrow, in Part 2, we’re on more familiar ground with Carmen, tales of a guy named Hoffmann, and the American West. ds