THE EASTER EGGS I have in mind are computerized treats, proofs that programmers have a sense of humor. David Pogue described several examples in “The Secret History of ‘Easter Eggs,’ “ The New York Times, August 8, 2019. Here are tidbits from his article, plus Easter eggs hiding in Microsoft Flight Simulator.

The First Easter Egg: Getting Even. Pogue writes that, back in 1976, Warner Communications bought video game maker Atari: “The game designer Warren Robinett, then 25, chafed under his new employer…. Worst of all, the new bosses had no intention of giving credit to the authors of their games. And so, as an act of civil disobedience, Mr. Robinett hid a flashing, colored credit screen in his game ‘Adventure’ that read ‘Created by Warren Robinett.’ ”

Revenge is Best Served Late. Pogue continues, “His bid for recognition eventually paid off spectacularly—in Steven Spielberg’s 2018 movie Ready Player One. To save his world at the movie’s climax, Parzival, the hero, must play Atari’s ‘Adventure’ and unlock its Easter egg.”

Jeff Bezos’ Thank You. Before 1997, Amazon was mainly an online bookstore. Then Bezos gave a fellow named David Risher the responsibility for broadening Amazon’s scope. Which, of course, Risher achieved with astounding success.

Pogue notes, “Beneath the copyright date on Amazon’s store-directory page, Mr. Bezos had hidden … a secret note: ‘Thank you, David Risher,’ it begins. ‘Your contributions will live forever in the form of an ever-evolving amazon.com.’ ”

Photo by Erin Brethauser and Tim Hussin and the following image in The New York Times, August 11, 2019. 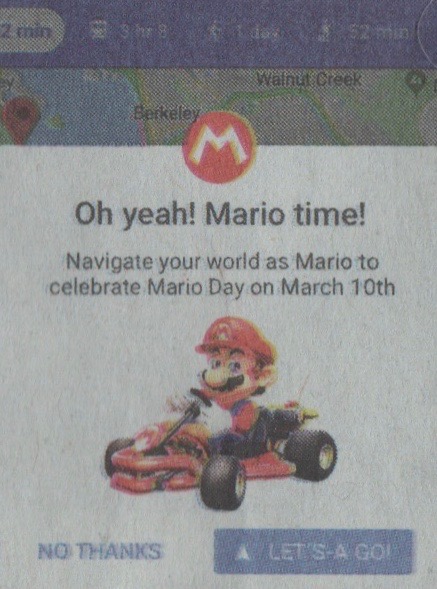 Mario made a Google Maps appearance.

WordPress.Com Hiring. WordPress (the web software used by SimanaitisSays) has incorporated Easter eggs into its own website. For instance, if you return to the WordPress hiring portion more than five times, a message appears, in part reading, “Give it a shot and apply already.”

Another WordPress Easter egg is so well hidden that fewer than a dozen people have ever found it. Matt Mullenweg, WP co-creator, has subsequently hired most of them.

Flight Sim Easter Eggs. Microsoft Flight Simulator has entertained us hobbyists (and, no doubt, its talented programers) with unannounced objects and locales. Some of these are well known tourist attractions, Stonehenge on England’s Salisbury Plain, Mount Rushmore in South Dakota, and other sites that can be challenging to identify from the air.

Yet other flight sim Easter eggs are likely the product of programers having fun. For example, Oklahoma’s Muskogee-Davis Regional is one of the 23,788 airports in Microsoft Flight Simulator’s world, 17,782 of which are in U.S, 353 in Oklahoma.

Flight simulators are one click away from positioning planes on any one of these runways. 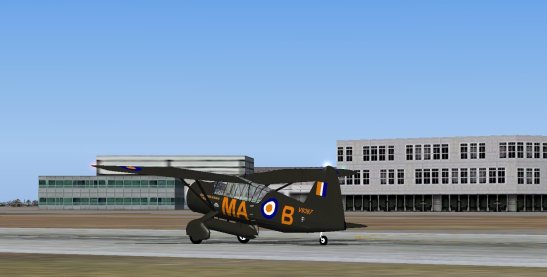 Here’s my Lysander ready to go at KMKO.

The Easter Egg may not be apparent at first. The surrounding flight sim scenery is default scrubland; there’s no Turner Falls Park, Treasure Valley Casino, Arbuckle Wilderness, or other attractions listed at Things to Do in Davis.

Upon returning to KMKO, though, the Easter egg is evident: Its runways float magically over a giant chasm. I am reminded of Indiana Jones and the Last Crusade, when Indy has the faith to cross a chasm to the Holy Grail.