HAIL TO THEE (WHOEVER HE OR SHE IS) PART 2

WE CONTINUE OUR celebration of national personifications here in Part 2 by encountering a previous SimanaitisSays cameo, a British yeoman, and an All-American.

Arminius ultimately suffered from bad press. His legacy had blossomed with German unification in the 19th century. Then it got hijacked by the Nazis as an example of Aryan purity. Fact is, his Cherisci heritage makes him no more pure than any other proto-European.

The United Kingdom’s John Bull. Wikipedia notes that John Bull “is usually depicted as a stout, middle-aged, country-dwelling, jolly and matter-of-fact man.” He was a satirical character created in 1712 by Dr. John Arbuthnot, a friend of Jonathan Swift and Alexander Pope.

John Bull is not an authority figure like Uncle Sam; rather, he’s a “yeoman who prefers his small beer and domestic peace, possessed of neither patriarchal power nor heroic defiance.” Or so Wikipedia says.

Maybe not patriarchal, but he has a patriotic streak. And a nifty waistcoat.

The United States of America’s Uncle Sam. Uncle Sam has been around since the 13th stanza of “Yankee Doodle,” 1775: “Old Uncle Sam come there to change/Some pancakes and some onions/For ‘lasses cakes, to carry home/To give his wife and young ones.”

J.M. Flagg’s 1917 poster was based on an earlier British poster of Lord Kitchener, shown below. Note Kitchener’s huge handlebar mustaches; Uncle Sam is said to resemble artist Flagg, who was clean-shaven with chiseled features.

There’s also the Uncle Sam tale that Samuel Wilson, Troy, New York, meatpacker, had a deal with Elbert Anderson, Jr., supplying pork and beef to U.S. troops during the War of 1812. Wilson marked each barrel “E.A.-U.S.” for Elbert Anderson-United States. Local troops, knowing Wilson as “Uncle Sam,” associated this with him. 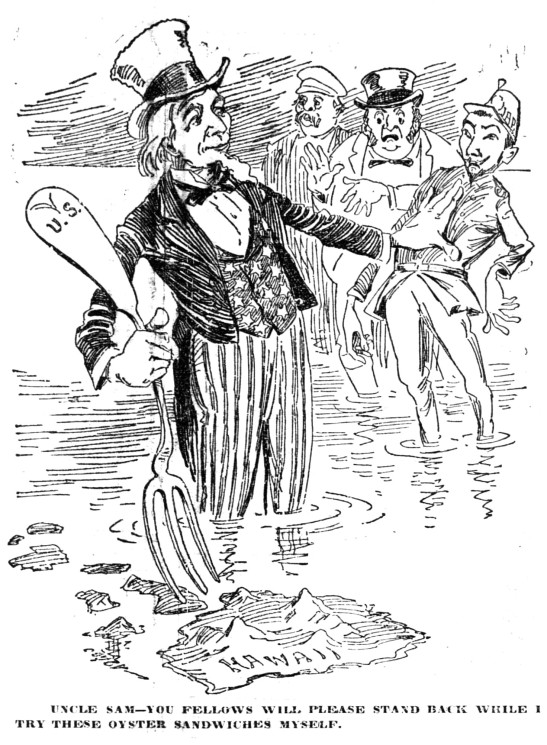 This 1897 rendering of Uncle Sam commemorates the U.S. annexation of Hawaii. I’m not particularly fond of oysters, but I love the caption. ds