TEGERNSEE IS IN the foothills of the Bavarian Alps. This lake isn’t very large, about 4 miles by less than a mile, its Alpine-fed water eventually reaching the Danube, known thereabouts as the Donau. Towns and villages on the lake include Gmund am Tegernsee, Tegernsee, Rottach-Egern, and Bad Wiessee.

Together with the beauty of the lake itself, there is aesthetic appreciation aplenty in these towns and villages. In sorting old photos, I came upon a folder marked “Tegernsee” devoted to happy snaps of its architecture. An Internet search today reveals that Tegernsee’s art is timeless, at least in the near-term sense of my photos’ recent decades. Here’s a selection.

The lake’s northern tip is less than 30 miles south of Munich. This proximity makes Tegernsee a popular tourist destination.

The Austrian border and the Bavarian Alps are only a few miles south.

Tegernsee is at 2380 ft. Germany’s highest mountain is the Bavarian Alps’ Zugspitze, at 9718 ft. It lies about 60 miles southwest of Tegernsee.

Rottach-Egern, on the south tip of Tegernsee. 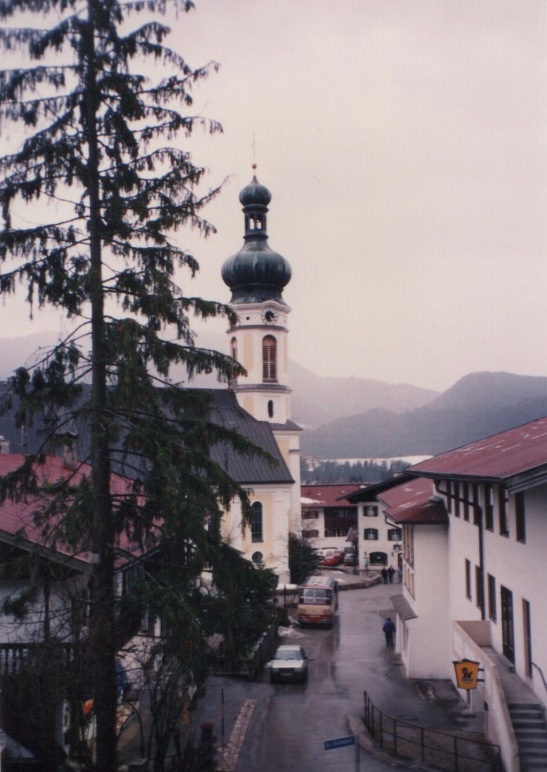 The German word for such a steeple is Zwiebelturm, literally “onion tower.”

I recall an off-season visit to Das Tegernsee, our group being almost its only guests. In the interest of energy preservation, lighting in the hallways of this grand hotel was resident-actuated. 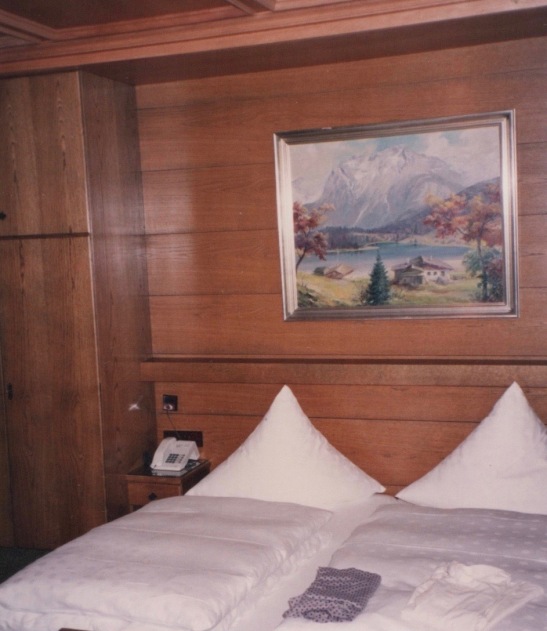 There’s always a view to be admired, even in one’s hotel room.

These artful pillow sculptures show up in several of today’s Internet hotel searches.

Artful sheep residing atop a roof received illumination at night.

I took this photo specifically for Wife Dottie’s sheep collection.

A religious theme resided in the eaves of the Eiscafe-Pizzeria Ristorante. Its second-story windows featured painted adornment. Many Tegernsee buildings are balconied. 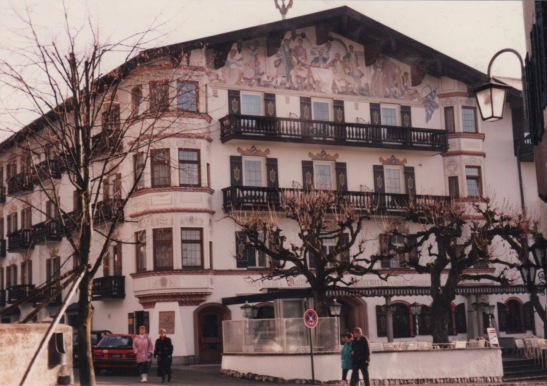 This building has balconies all around. I’m confident there’s a complex tale taking place beneath its eave.

The Internet lists several guesthouses named Pensione Edelweisse, but I couldn’t find this specific one. 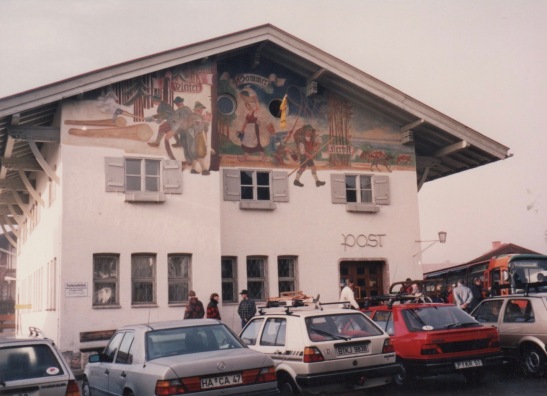 Seasons in the eaves.

This mural depicts workers gathering wood in Winter, a damsel carrying provisions in Sommer, and two trekkers with their dog in the Herbst. Perhaps Frühling is just around the corner on the other eave.

I recognize the Bavarian colors above the guy’s head, but can only guess at the stirring tale being depicted. ds