IS THAT WHAT’S TROUBLING YOU, BUNKIE? PART 2

AS RECENTLY AS yesterday here at SimanaitisSays, I cited Ann Gibbons’ Science magazine article “Why 536 was ‘the worst year to be alive.’ ” What with one thing and another, I presented the problem—18 months of darkness, dropping temperatures, crop failures, mass starvation—but nothing of the detective work understanding it. Here it is in Part 2.

Whence the Eternal Night of 536? Gibbons writes, “Ever since tree ring studies in the 1990s suggested the summers around 540 were unusually cold, researchers have hunted for a cause. Three years ago, polar ice cores from Greenland and Antarctica yielded a clue. When a volcano erupts, it spews sulfur, bismuth, and other substances high into the atmosphere, where they form an aerosol veil that reflects the sun’s light back into space, cooling the planet.”

Matching these ice record with tree ring records of climate was the key: Gibbons writes, “… nearly every unusually cold summer over the past 2500 years was preceded by a volcanic eruption.”

Ultraprecise Analysis. A 236-ft. ice core extracted from the Colle Gnifetti Glacier in the Swiss Alps provided more evidence. This detective work was performed by an interdisciplinary team from the Climate Change Institute at the University of Maine in Orono and Harvard’s Initiative for the Science of the Human Past. Among researchers were medieval historian Michael McCormick and glaciologist Paul Mayewski. 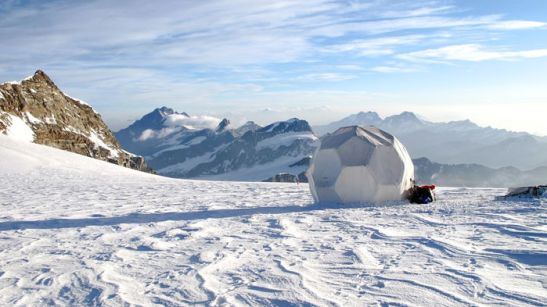 Researchers’ outpost on Colle Gnifetti Glacier in the Swiss Alps. This and the following images from Science, November 15, 2018.

The researchers used a laser to carve slivers, only 120-micron (0.0047-in.) thick, from their glacial ice core. Each sliver represented just a few weeks of snowfall. “This approach,” Gibbons says, “enabled the team to pinpoint storms, volcanic eruptions, and lead pollution down to the month or less, going back 2000 years….” 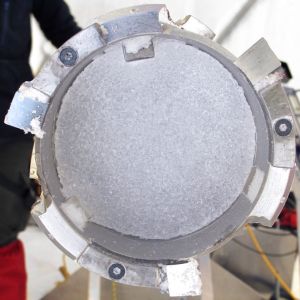 Slivers from a Swiss ice core were analyzed for a dozen elements.

Swiss ice from the spring of 536 contained particles of volcanic glass that closely matched samples found in lakes and peat bogs in Europe and in Greenland ice, and also in volcanic rocks from Iceland.

“The next step,” Gibbons notes, “is to try to find more particles from this volcano in lakes in Europe and Iceland, in order to confirm its location in Iceland and tease out why it was so devastating.”

A timeline, thanks to a Swiss ice core and extensive research.

A Lead Trace. Researchers also identified variations of the element lead in their sampling. A lead spike in 640 is associated with increased smelting of the element silver, which in turn was a sign of an economy rebounding from the 536 cataclysm. A second lead peak, in 660, marks another infusion of silver into an emergent medieval economy. Notes Christopher Loveluck, archaeologist at Britain’s University of Nottingham, “It shows the rise of the merchant class for the first time.”

Don’t get overconfident, though. Gibbons observes, “Lead vanished from the air during the Black Death from 1349 to 1353, revealing an economy that had again ground to a halt.”

Isn’t there always something? And isn’t science great at ferreting it out? ds

2 comments on “IS THAT WHAT’S TROUBLING YOU, BUNKIE? PART 2”

This entry was posted on December 10, 2018 by simanaitissays in Sci-Tech and tagged "Why 536 was 'the worst year to be alive' " Ann Gibbons AAAS Science, Christopher Loveluck Archaeologist University of Nottingham, Climate Change Institute at University of Maine Orono, Colle Gnifetti Glacier Swiss Alps, element lead as indicator of changing economy, Harvard's Initiative for the Science of Human Past, Icelandic volvano: cause of cataclysmic year 536, Michael McCormick medieval historian, Paul Mayewski glaciologist.