I LOVE THE art of Kabuki and find I have much in common with a Frenchman who goes by the name Shôriya Aragôrô. It is he who researches, composes and runs the website Kabuki 21.

“Shôriya Aragôrô deep in thought,” from a short movie directed by Simon de Meguro, Kinkazan Island, “some years ago.” Image and quotes from Kabuki 21.

In December 1998, four years into his nine-year residence in Japan, Aragôrô went to Tokyo’s Kabukiza Theatre and “fell in love with the art of Kabuki.” His website, in English since 2002, displays this enthusiasm.

A Tough Guy. Kagekiyo is a traditional play first staged in 1732. (Kabuki dates from the early 1600s, comparable to Shakespearean times.) Kagekiyo is a general in the Heike clan, an aragoto tough-guy character, easily identified by his elaborate facial makeup.

A Tragic Tale Along a River Bank. The Sumidagawa dance scene was premiered at Kabukiza in 1919. Adapted from an earlier Noh drama, it was inspired by Russian ballets seen by a Kabuki actor during his European studies. The drama takes place on the banks of Tokyo’s Sumida River, where a mad woman seeks her son stolen by a slave trader. 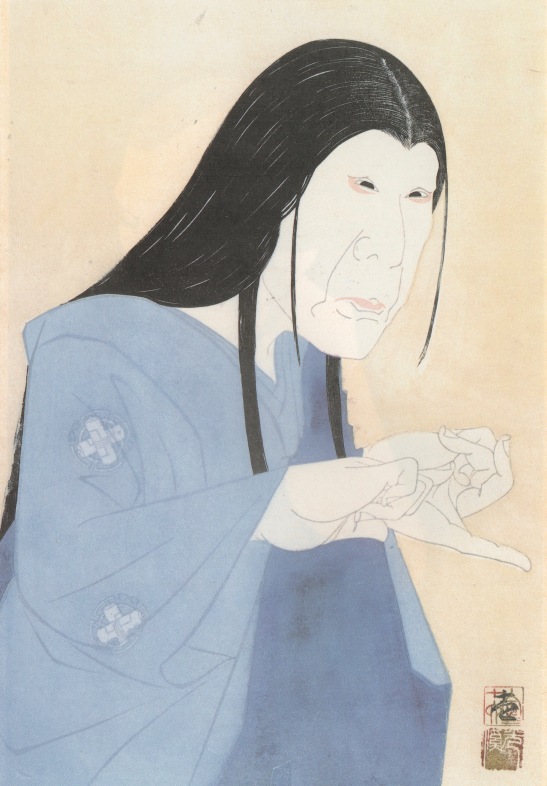 Nakamura Utaemon VI began his onnagata career, i.e., playing female roles, in 1922. Considered the finest onnagata of the second half of the 20th century, Utaemon’s last stage performance was in 1996. He died in 2001.

A Kabuki Family Affair. Kabuki heritage is displayed in the next print: Narukami is a drama of illicit love involving Princess Taema and wicked priest Narukami. He has imprisoned a dragon god, thus causing a drought; she’s sent to remedy matters.

The first performance of Narukami was in 1684, with Ichikawa Danjûrô I in the title role. Subsequent Danjûrôs inherited the role until Danjûrô IX balked, calling the play immoral and disrespectful. (Narukami succumbs to temptress Taema and cops a feel inside her kimono.)

Renegade Brothers. The play Kurumabiki was originally staged in 1746 as puppet theater. Its Kabuki version followed within a month. It’s a tale of Umeômaru and Sakuramaru, two brothers who are masterless samurai, rōjin, and their conflict with a third brother, Matsuômaru, who’s still loyal to his master. 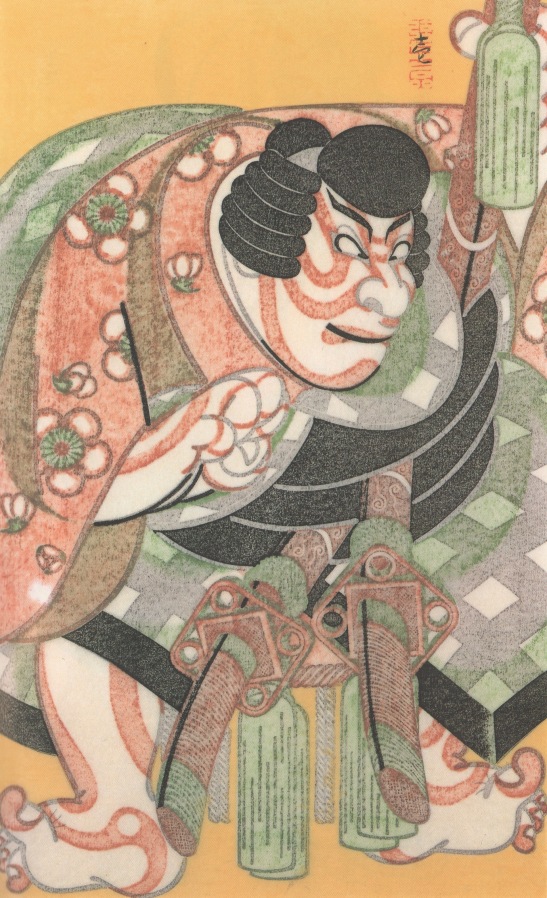 As part of a complex plot, the two rōjin brothers disguise themselves with enormous straw traveling hats. Kabuki 21’s Shôriya Aragôrô notes, “During an intermission in Paris, I heard one person say to another, ‘I couldn’t understand it at all. Those barrel-size straw hats were a surprise, though. Do you think they will become next year’s fashion?’ ”

Fine, until you encounter your other brother, the non-rōjin one. ds