CAMILLE PISSARRO—A ROOM WITH A VIEW

EXCELLENT EYESIGHT would seem to be an artist’s requisite. Yet many of Camille Pissarro’s finest paintings came after a persistent eye infection affected the way he worked, not only visually, but also where Pissarro painted as well. 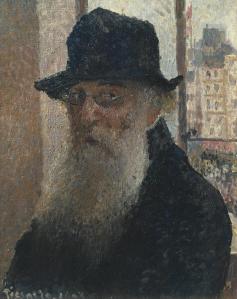 I first learned of Camille Pissarro when I was living in the U.S. Virgin Islands. Prior to 1916, these Caribbean islands were the Danish West Indies (which, to this day, explains, sorta, their keep-to-the-left rule of the road; a taxi driver lobby helps too).

In 1830 Camille Pissarro was born at 14 Dronningens Gade in Charlotte Amalie, capital and largest city on St. Thomas, the other major islands being nearby St. John and, 44 miles south, St. Croix.

Camille’s father, of French nationality, was of Portuguese-Jewish decent; his mother was of French-Jewish St. Thomian stock. (The St. Thomas Synagogue, built in 1833, is the second-oldest synagogue in what is now the U.S.)

When Camille was 12, he was sent to boarding school in France, where he developed an appreciation for French artists. His teachers gave him the basics in drawing and painting; one suggested he seek artistic inspiration in his native St. Thomas. 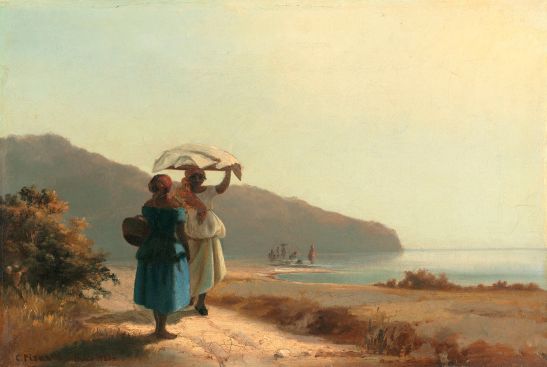 Pissarro returned at age 17 to the Caribbean, where his father encouraged his involvement with the family hardware store. Camille much preferred drawing and filling sketchbooks. At age 21, he opted for Paris, where he continued his artistic studies.

Pissarro’s early paintings, first exhibited in 1859, were influenced by his tutor, Camille Corot. By 1873, according to art historian John Rewald, he had become “the dean of the Impressionist painters,” at least in part because Pissarro was the eldest of the bunch, but also “by virtue of his wisdom and his balanced, kind, and warmhearted personality.”

Above, Square de Vert-Galant: Sunny Morning, 1902. Below, the same location, The Raised Terrace of the Pont-Neuf, Place Henri IV; Afternoon Rain, 1902. These and the following images from The Impressionist and the City: Pissarro’s Series Paintings,

In 1888, at age 58, Pissarro suffered an eye infection that persisted until his death some 15 years later. The problem particularly bothered him outdoors, so instead Pissarro performed his sketching and painting indoors, often selecting higher floors to give a novel view of the people and urban settings. During this time, Pissarro resided in various hotels in Dieppe, Le Harve, Paris, and Rouen.

His works included several series of peering out the same window at the same view, but chosen to portray changes of light depending upon time of day, the weather, and time of year.

Pissarro’s artistry can be appreciated in these contrasting impressions of the same locales.

I particularly like the subtly elevated points of view. Don’t you? ds

One comment on “CAMILLE PISSARRO—A ROOM WITH A VIEW”