A PAIR OF BLITTS, ONE WITH WINTER

BARRY BLITT is a wonderful political cartoonist whose work in The New Yorker, The New York Times, Vanity Fair, and other publications has earned him “adoration from critics and fans and piles of hate mail from everyone else.” So says a cover blurb of a Christmas gift from Wife Dottie, Blitt, showcasing more than 25 years of his work.

Barry sets the tone for his book in the second sentence of its Introduction: “I actually swiped the opening sentence from Catcher in the Rye, because writing about myself is a difficult proposition. I’d hope this book would present a collection of my drawings and cartoon from over the years, and that I myself could hide behind the endpapers without much fuss.”

Blitt gives rare insights to many of his illustrations and magazine covers.

Many of Blitt’s New Yorker covers are memorable.

Blitt: “This light-hearted frolic sank like comedy gold (lead), and for a while I thought I might have to find another vocation (orthodonture? the hospitality industry?)

And they cross religious boundaries.

A second Christmas book from Wife Dottie is The Founding Fathers! Those Horse-Riding’, Fiddle-Playin’, Book-Readin’, Gun-Totin’, Gentlemen Who Started America.

This one is pitched “for Young Readers,” but I highly recommend it to anyone seeking capsule doses of Founding Father lore. Jonah Winter obviously shares Barry Blitt’s sense of humor.

For example, he writes about diversity of the Founding Fathers (“who sometimes couldn’t even stand to be in the same room with each other”). “But,” he notes, “and this is a big ‘but,’ the men we now call the Founding Fathers were some of the most tremendously smart people who ever lived—just the sort of people you might want to invent a new country (from scratch, without any instruction manual).”

Remember in the book’s title, “Book-readin’.” And, for example, among facts noted are Benjamin Franklin’s mastery of English, French, Latin, Italian, German, and Spanish. 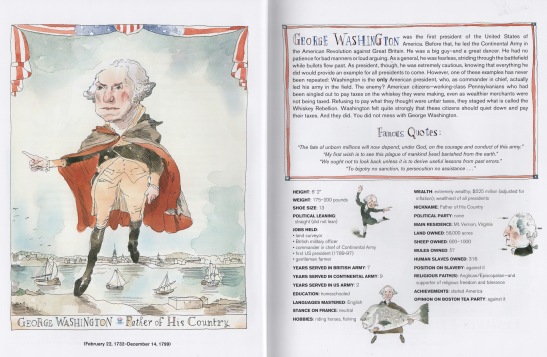 Nor does the book shy away from touchy subjects, the Founding Fathers’ differing views on slavery, religion, or all men (and women too?) being created equal.

If schools still taught Civics, this could well be required reading, with Barry Blitt’s thoughtful artwork being an added spiff to giggle about during study hall.

Last, for more of talented political cartoonists, including Blitt, visit politico.com’s recent article on Drawing Trump. As noted in its introduction, “Being president is a tough job. The president has to sign bills, conduct wars, and uphold a heap of dusty rituals and customs. One of these traditions, perhaps the least dignified of all, is to be the focus on the ink-stained wretches of the cartooning trade.”

Each artist commented on the task as well. For example, Bagley: “Drawing Trump is fascinating—it’s like there is some entity wearing a Trump suit, and if you watch very carefully you begin to see the outlines of the malevolent being inside.”

Gee, these talented people could be columnists as well. ds