THIS PAST Friday evening, Wife Dottie and I “Celebrated the Holidays with Seth MacFarlane” at our local René and Henry Segerstrom Hall. A good time was had by all, albeit after what we found a somewhat rocky start.

Our last visit to Segerstrom Hall, earlier this year, couldn’t have been more contrasting: a showing of Fritz Lang’s 1927 silent classic, Metropolis, accompanied by Peter Richard Conte playing the hall’s immense pipe organ. This instrument, which takes up much of the concert stage back wall, had no need whatsoever for artificial amplification.

And, to our minds, neither does the Orange County Pacific Symphony Orchestra that provided the warmup act to Seth MacFarlane’s performance.

Our seats were on the aisle, Row A (with the hall’s setup, the fourth row), stage left. However, no more than ten feet in front of us was a bank of huge—and I mean huge!—speakers blasting forth everything indiscriminately from violin pianissimo to brass forte.

Geez, this wasn’t glam metal. It was Silent Night, a Chanukah Overture, and Rudolph the Red-Nosed Reindeer, among other holiday favorites. Nor was the sound system, at that proximity and intensity, all that effective. Wife Dottie recalls that MacFarlane’s Royal Albert Hall Concert, viewed on our home TV, had better sound quality than poor Gavin Macleod had for his spirited narration of The Night Before Christmas.

Segerstrom Hall ushers, bless their hearts, kindly reseated us in Row L, also on the aisle, but far enough away from the killer speakers to allow us to enjoy Seth MacFarlane’s portion of the evening.

And so we did. MacFarlane has a love of The Great American Songbook, standard tunes many of which come from American musical theater and film musicals. He sang a variety of these, each with entertaining commentary, along with holiday standards including “Have Yourself a Merry Little Christmas,” (originally sung by Judy Garland in Meet Me in St. Louis); Mel Tormé’s “The Christmas Song,” (which most us know as “Chestnuts Roasting on an Open Fire…”); and even “A Christmas Blues.”

Wife Dottie says she appreciates MacFarlane’s complex intelligence beyond just his vocal artistry. He has had the popular animated sitcom Family Guy on TV for 16 seasons now. Seth also produced (and helped fund) Neil deGrasse Tyson’s Cosmos: A Space Odyssey. More recently, he created and stars in The Orville, a sci-fi comedy-drama inspired by Star Trek.

Seth’s musical idol is Frank Sinatra. In fact, in a TV interview with another Seth, late-night host Seth Meyers, MacFarlane notes that his singing career had been enhanced by the same vocal coaches, then in their nineties, who worked with Sinatra. The video displays Seth’s beguiling charm. 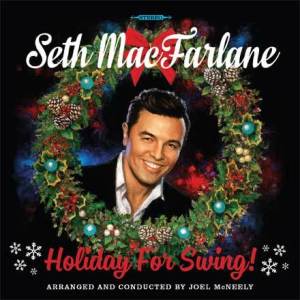 We hope Seth returns to Orange County, California, next Christmastime. We’ll be there, Row L, on the aisle.

What’s more, Wife Dottie and I wish you all a Joyous Christmas 2017. ds

2 comments on “HUZZAH FOR SETH MACFARLANE!”